Zack Snyder confirmed the big news while mentioning that his cut will air on WB's new OTT platform, HBOMax and will release in 2021. 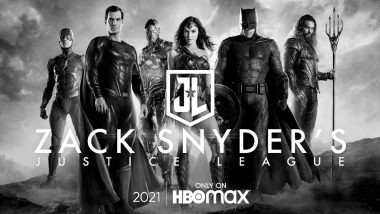 Wait, what just happened? Someone, please pinch us for we are unable to reckon the reality. DC fans are in for a big treat as Warner Bros have decided to release Justice League's Snyder cut. Yup, the one that's touted to be phenomenal and better than the existing version. Zack Snyder confirmed the big news while mentioning that his cut will air on WB's new OTT platform, HBOMax but it will take a while. The movie is slated to hit the platform in 2021 and that's something we are looking forward to. In these trying times, here's a beacon of hope that should keep you going. Justice League: Ben Affleck, Gal Gadot Join #ReleaseTheSnyderCut Movement (View Tweets).

Speaking about his cut, Zack in his new interaction with The Hollywood Reporter said, "It will be an entirely new thing, and, especially talking to those who have seen the released movie, a new experience apart from that movie." The director further insists that we all saw 1/4 of his version and there's a lot that we can expect next. The news of releasing his 'cut' came as a surprise to Snyder himself. "I always thought it was a thing that in 20 years, maybe somebody would do a documentary and I could lend them the footage, little snippets of a cut no one has ever seen," he added.

THIS JUST IN: Zack Snyder makes it official: His cut of #JusticeLeague will be released on HBOMax in 2021. Huge news for fans pic.twitter.com/3PmNDnp8kn

From asking Warner Bros executives to hear his idea to convincing them and finally starting the post-production work on his raw cut, Snyder and his wife Deborah went through a stringent process to make the impossible look possible. Their development was slightly hampered when coronavirus was declared a pandemic and some executives at WB studios thought of ditching the idea once again. But the couple stayed firm. "No, this is the right time' because our visual effects houses that rely on so much are running out of work, so now is the time to be doing this," said Deborah and it made so much sense. JJ Abrams Developing Three Series for HBO Max; A Spin-Off Series on Stephen King’s ‘The Shining’, ‘Justice League Dark’ and ‘Duster’.

It's still unclear if we'll get to see the entire four-hour long director's cut all at once or if it will be divide into six parts. The version that eventually came out, in the end, was disappointing (but let's not blame Whedon for that) and DCEU fans were quick to start a petition for #ReleasetheSnyderCut. We all had heard it was brilliant. Finally, Justice League actors like Ben Affleck, Gal Gadot and Jason Momoa also extended their support to its release and WB had to give in eventually.

Snyder is especially thankful to all DC fans who made this possible. "Clearly this wouldn’t be happening without them," he said while also sharing his gratitude by saying "This return to that pedigree and to let my singular vision of my movie be realized, in this format, in this length, is unprecedented and a brave move." The Avengers Director Joss Whedon Drops Batgirl Movie; Is Justice League To be Blamed?

We are still unable to grasp this big development but as they say, 'all's well that ends well.'

(The above story first appeared on LatestLY on May 21, 2020 12:09 AM IST. For more news and updates on politics, world, sports, entertainment and lifestyle, log on to our website latestly.com).