Crash Landing On You, Hotel Del Luna, Vincenzo - 5 Kdramas To Get An American Remake Soon

Koreans have managed to crack innovative storytelling which manage to draw in every content consumer irrespective of their biases. Now that's nothing short of an art and that's exactly why now US is gearing up to remake as many as five Kdramas in the near future. 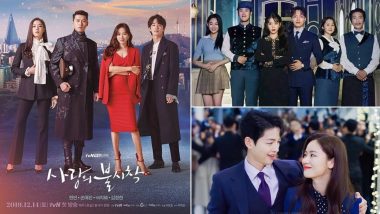 Kdramas have opened an exciting new avenues for content. The content makers there have managed to leverage their socio-political and economic scenarios to make supremely engaging stories. Much credit goes to Netflix for bringing their content pieces closer to the entire world. A pandemic later, there are more kdrama fans globally than there ever was. The reason being Koreans have managed to crack innovative storytelling which manage to draw in every content consumer irrespective of their biases. Now that's nothing short of an art and that's exactly why now US is gearing up to remake as many as five Kdramas in the near future. Let us tell you a bit about them. Best K-Dramas To Binge-Watch: From ‘Crash Landing on You’ to ‘Hospital Playlist’, These 7 Korean Dramas Are Must-Watch.

Crash Landing On You

The series weaves a fairy-tale romance between two people who are forbidden to love. They belong to two different Koreas but their hearts found a way to connect. The original had the delightfully good-looking Hyun-Bin and Son Ye Jin. The US remake will be made in collaboration with Studio Dragon and Netflix.

A plush hotel with ghosts for guests, an immortal owner and a human manager...nothing can get better than this. Despite being a ghost comedy, the series has legit scares and some heartbreaking sequences too. IU is simply fantastic in the show. The remake will be written by the co-showrunner and executive producer of two seasons of Altered Carbon, Alison Schapker. Park Shin-hye and Choi Tae-joon to Tie the Knot in January 2022 in Seoul; Couple Expecting First Child Together.

One of the popular US networks, CW announced that they will be remaking Korean series W which starred Lee Jong Suk and Han Hyo-Joo. Deadline reports that the series will be called Angel City. The show is about a talented surgeon who gets sucked into the alternate universe of a webtoon novel created by her own father. W blends visual effects beautifully with a racy story which will keep anybody hooked.

Lee Seo-Jin's Trap will also be remade in the US and will be called The Club. Ma Dong Seok, who was last seen in The Eternals is the co-producer and the lead actor of the US remake. The story is about a detective who loses his son and while chasing the mystery behind it, unearths something he never imagined.

Vincenzo which has Soong Joon-ki as Korean-Italian mafia lawyer doing good along with his band of people was loved by everyone. Apart from the chemistry of the lead pair, it's the spectacular visuals and CGI sets that left everyone impressed. Hence it comes as no surprise that US has their eyes set on Vincenzo. As for the healing romance, Hometown Cha-Cha, it transcends generations and has something for everybody. Studio Dragon which had rights for both and discussions are on, apparently.

(The above story first appeared on LatestLY on Dec 23, 2021 04:18 PM IST. For more news and updates on politics, world, sports, entertainment and lifestyle, log on to our website latestly.com).