Death on the Nile is an upcoming film directed by Kenneth Branagh based on the Agatha Christie novel of the same name. It releases on February 11, 2022. 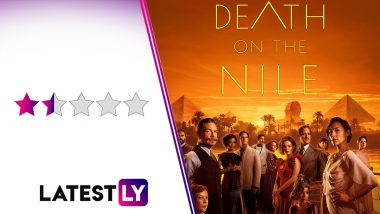 Death on the Nile Movie Review: Whodunnits are making a return and that’s amazing to see. After Knives Out came out in 2019, everything seemed game considering just how stagnant this genre had been. Constantly we have been hit with such amazing films that you take a look back and see just how great this genre has gotten. Even seeping into shows, we got the amazing The Afterparty that again revolutionized the genre. So does Death on the Nile fit over here? No, it really does not. Death on the Nile Review: Gal Gadot, Ali Fazal's Whodunnit Opens to Mixed Reception, Critics Say it Lacks Charm.

Death on the Nile sees Kenneth Branagh’s Hercule Poirot take on another case that pushes his detective skills to the limit. After a murder takes place on a ship, Poirot in a race against time has to find the killer before more casualties on board take place.

Unlike Murder on the Orient Express, Death on the Nile features a cast that’s wrapped way too heavily into controversy that it ultimately diminishes their hard work. From a subjective standpoint, I did like everyone’s performance. Kenneth Branagh again delivers a great take on Poirot. Gal Gadot dazzles as Linnet Ridgeway while Russell Brand brings great depth to Linus Windlesham. But out of everyone, Emma Mackey was the one who truly stole the show.

Mackey plays the role of Jacqueline de Bellefort and really sells the role of a jealous former lover. I loved every scene with her. As for the part of the cast that’s controversial, they are better left not spoken about, although Armie Hammer does the unthinkable and plays himself, which is a sleazy creep.

The premise for Death on the Nile is good. You have a murder take place on a ship, passengers are present, a world renowned detective is there and you have a solid makings of a Whodunnit, only that it doesn’t really feel well realised. For a movie called Death on the Nile, the death itself, which I won’t reveal, doesn't take place until an hour into the film. You know… the death that’s supposed to be the entire point of the film.

Until then just so much time is wasted where you get to know the in-and-about of each and every character. Sure character development is important, but after a point it just felt overdone and Death on the Nile started feeling a bit redundant. I kept waiting for death to happen, and when it happened, I was shocked, but it just took place way too late.

With the plot itself taking so long to move forward, when we actually get to the detective part of the story, it feels like it arrived way too late. What follows is a rushed montage of Poirot questioning everyone while things happen according to the convenience of the plot. Which is a shame, because it was the most interesting moment of the film. Watching Poirot do his thing was genuinely great, but I just wish that we got to see more of that.

The visuals of Death of the Nile also feels like a mix between a videogame and real life. The movie is shot beautifully, but so much of it is diminished by its uneven visuals. Death on the Nile has one of the most jarring green screen shots I have ever seen. It’s so distracting because when they pull back, it’s a huge VFX mess, but once you go back to scenes shot on location, it just feels ultimately distracting.

Death on the Nile also seems to be stuck in the past. The genre of Whodunnit has advanced a lot. Knives Out did a brilliant job of showcasing this with its charm and wit, something Death on the Nile lacks. While watching the twist of Knives Out, your expectations were subverted in a good way, but here the final twist is just as predictable as they come.

Agatha Christie no doubt is a fabulous author, but if her stories are being adapted then I hope they are at least modernised in some way. Death on the Nile Director Kenneth Branagh Opens Up About How Tonal Quality of Movies Are Changing With Times.

Death on the Nile has its occasional bursts of excitement, but it can’t seem to escape from the past. Seeing as to how the Whodunit genre has evolved over the years, watching this just feels like seeing a fossil come alive.

(The above story first appeared on LatestLY on Feb 10, 2022 01:49 PM IST. For more news and updates on politics, world, sports, entertainment and lifestyle, log on to our website latestly.com).