Dumbo Trailer: Disney's Favourite Flying Elephant is Here To Give You Smiles and Tears - Watch Video 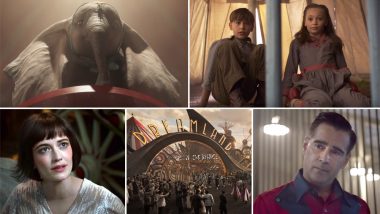 Dumbo has been one of Disney's classic stories told on screen, with the 1941 movie still considered one of the best-animated flicks made in Hollywood. The tale of a flying baby elephant trapped in a circus and looking to be reunited with his separated mother has the trappings to make you smile through your tears. If you had missed out on the animated flick, fret not. For Tim Burton, the director who make classics like Edward Scissorhands and Beetlejuice and the less-appreciated Alice in Wonderland remake, is now making a live-action adaptation of the film that features digitally created Dumbo surrounded by real actors. Dumbo Teaser Trailer: Tim Burton's Eye for Visual Flair Makes The Tale of Disney's Lovable Big-Eared Elephant Appealing.

The trailer of the film is out, and it looks lovely to the eyes, and touching to the heart. The movie looks to be a faithful adaptation of the classic, as we see Dumbo in the possession of a circus, owned by Danny DeVito's characters. Colin Farrell plays the one-armed trainer for Dumbo, whose kids discover that the little elephant can fly. When he gets separated from his mother, the kids decide to get him back with her. However, when Dumbo's flying skills make him the talk of the town, that mission seems impossible when vested interests are looking to make profits out of the pitiable animal. Fans Want Disney to Rehire James Gunn for Guardians of the Galaxy.

The special effects look really good, especially how Dumbo is rendered. There are some very eye-pleasing visuals, which of course, is trademark Tim Burton. But the best thing about the trailer is that we really feel for the protagonists.

Watch the Trailer of Dumbo Here -

Dumbo flies into theaters on March 29, 2019. So how did you find the trailer? Share your thoughts in the comments section below.

(The above story first appeared on LatestLY on Nov 15, 2018 01:41 PM IST. For more news and updates on politics, world, sports, entertainment and lifestyle, log on to our website latestly.com).