Dumbo is scheduled to release in March 2019. 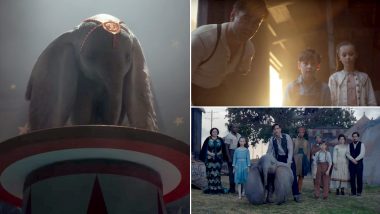 All those who are familiar with the tale of Dumbo can rejoice over the fact that Disney is making a live-action adaptation of the story. Following the successes of The Jungle Book, Pete's Dragon and Beauty and The Beast, Disney handles the reins of handling the Dumbo adaptation to the Academy Award-nominated director Tim Burton. Burton is known for his association with Johnny Depp and making movies like Ed Wood, Alice in Wonderland, Edward Scissorhands, and Sweeney Todd: The Demon Barber of Fleet Street.

However, Dumbo will not be having Depp in the lead; instead the movie will star Colin Farrell, Michael Keaton, Danny DeVito, Eva Green and Alan Arkin. Plus, the wonderfully created elephant. The trailer, that has been recently revealed, shows how the Farrier family comes across a petrified Dumbo, and how the kids befriend the elephant calf. There is a sense of endearment in the teaser making the movie appealing to both kids and adults! Also the visuals are awesome!

Here's the official synopsis of the movie - "From Disney and visionary director Tim Burton, the all-new grand live-action adventure “Dumbo” expands on the beloved classic story where differences are celebrated, family is cherished and dreams take flight. Circus owner Max Medici (Danny DeVito) enlists former star Holt Farrier (Colin Farrell) and his children Milly (Nico Parker) and Joe (Finley Hobbins) to care for a newborn elephant whose oversized ears make him a laughingstock in an already struggling circus. But when they discover that Dumbo can fly, the circus makes an incredible comeback, attracting persuasive entrepreneur V.A. Vandevere (Michael Keaton), who recruits the peculiar pachyderm for his newest, larger-than-life entertainment venture, Dreamland. Dumbo soars to new heights alongside a charming and spectacular aerial artist, Colette Marchant (Eva Green), until Holt learns that beneath its shiny veneer, Dreamland is full of dark secrets."

Dumbo is scheduled to release in March 2019.

(The above story first appeared on LatestLY on Jun 13, 2018 05:00 PM IST. For more news and updates on politics, world, sports, entertainment and lifestyle, log on to our website latestly.com).