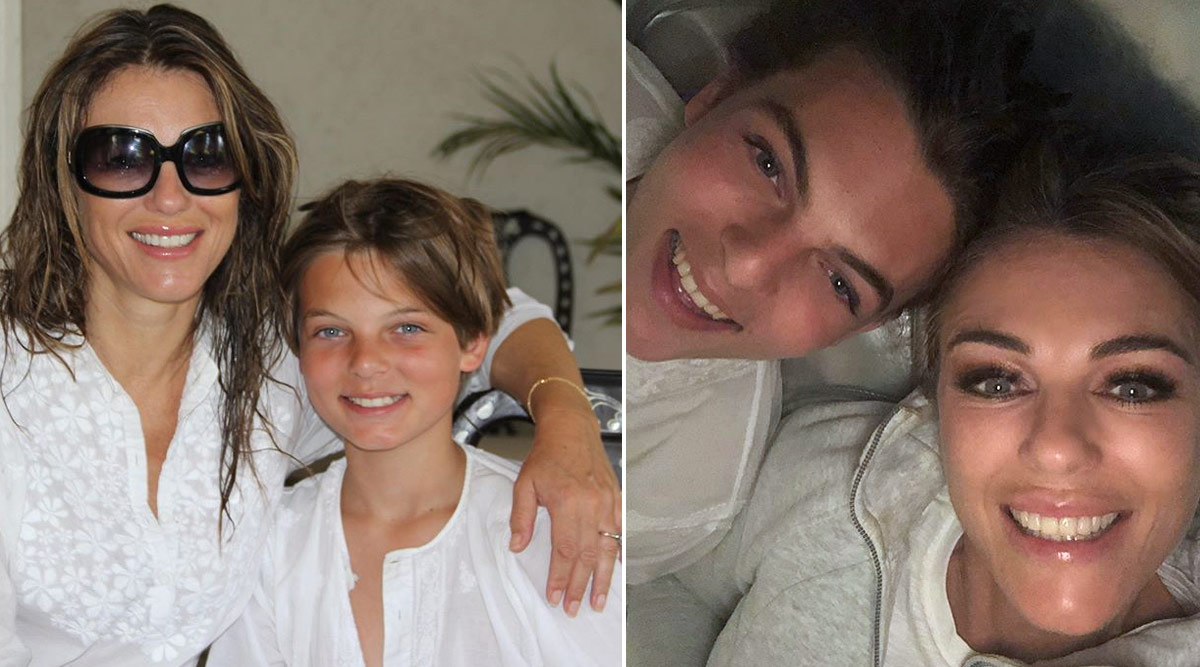 Actress Elizabeth Hurley is filming a murder mystery with her 18-year-old son Damian while in lockdown due to coronavirus pandemic. She's been self-isolating in her Herefordshire home with her son and other family members. And Hurley is keeping herself entertained. The actress, 54, took to Instagram and shared a photo of herself donning an animal print headscarf with a bejeweled gold detail with pearls, reports dailymail.co.uk. She also wore a pair of hoop earrings and a faux fur stole along with a red sleeveless dress. Shang-Chi’s Simu Liu Reveals His Hilarious Marvel Quarantine Workout and That’s the Energy We Want in Our Lives (Watch Video)

Looking at the camera in a sultry way, Hurley completed her look for the murder mystery event with a red lipstick. Alongside the photo, she wrote: "Filming a murder mystery at home #amusingourselves #lockdown #stayhome #staysafe." It comes days after the actress shared a lingerie photo as she urged fans to keep themselves safe on what was her 11th day in lockdown. She told fans she was holed up in her Herefordshire home with eight others, including her elderly mother and aunt. Ellen DeGeneres Faces Backlash For Her ‘Self-Quarantine Is Like Being In Jail’ Remark.

In her post, Hurley admitted that after days of going make-up free in her home she decided to get dressed up in her best lingerie for her latest post. The star explained that she'd been self-isolating with her son, her mother Angela, 79, and her elderly aunt, as well as a close friend who was considered high risk. She wrote: "Day 11 of my family's lockdown in Herefordshire and I finally washed my hair, put on some make up and found time to post.

Elizabeth Hurley Is Making The Most Of Her Quarantine Time

"In these scary times I feel incredibly lucky to live in the countryside and have lots of outside space. As well as my son, I have seven other people living with me including my 79 year old mother and her sister- also in her late 70's- and one of my best friends who is in the highest risk group with severe respiratory problems. "Keeping everyone as safe as possible (and fed) is a full time job. We all are full of the highest admiration for our wonderful NHS staff and are doing everything we can to not add to their burden. Thank God it's Sat night and we can r-e-l-a-x and take a break from being glued to the news #stayhome #staysafe #nhsheroes."