The tragic death of George Floyd in Minneapolis has triggered a wave of outburst with protestors demanding justice for a 46-year-old black man who died in police custody. 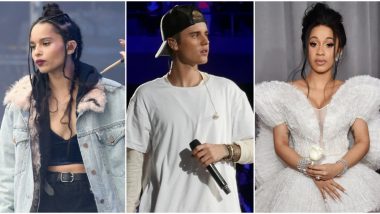 It's the 21st century that we live in and yet some African Americans have to fight for their freedom. The tragic death of George Floyd in Minneapolis has triggered a wave of outburst with protestors demanding justice for a 46-year-old black man who died in police custody. The terrifying video of his death spread like a wildfire on social media and it showed the police officer driving his knee into Floyd's neck as the handcuffed man repeatedly kept saying he can't breathe. False News Swirls Around Minneapolis Officer in Fatal Arrest.

Minneapolis mayor had clarified that four officers who were involved in this tragedy were fired but Ben Crump, the attorney who's representing Floyd's family has called in for their arrests. Hollywood celebs were equally stunned and startled to hear about this horrific incident and some of them took to their social media accounts to voice their outbursts. Cardi B, Justin Bieber, Viola Davis and other prominent celebs reacted to the tragic incident while reminding everyone that 'America is not the land of the free'.

Check Out their Reactions

Enough is enough! What will it take ? A civil war ? A new president? Violent riots ? It’s tired ! I’m tired ! The country is tired !You don’t put fear in people when you do this you just show how coward YOU ARE ! And how America is really not the land of the free !

In 2017, we partnered with @TVOne and creator/executive producer @LemuelPlummer for his docu-series #TwoSides. A series examining the fatal police encounters involving #EricGarner, #EzellFord, #JohnCrawford and #SandraBland. We're praying for the family of #GeorgeFloyd and those who have been impacted by police brutality! Click the link in our bio to watch #TwoSides on the TV One app. #EnoughIsEnough #EndPoliceBrutality #BlackLivesMatter 🎨@bychenelle 🎥@tvonetv 🔁@juveeproductions

GEORGE FLOYD my heart breaks for you and your family. #policebrutality needs to stop. #sayhisname

George Floyd. So heartbreaking to hear about the continuous cycle of violence aimed at black people by racist cops. Murder charges only. #justiceforgeorgefloyd First post where I’ve had to turn off comments. Ain’t none of you getting the last word today. That’s that.

Until he died... the police officers face says it all... the disregard of human life... human black life... Why is it when the police show up for black men murder can easily be put into the equation… On the other hand when a young white teen walks into a church sits down and worships with the members a few minutes later pulls out a high-powered weapon and murders innocent black people while they were worshiping God... The cops showed up apprehend him and take him to get something to eat and he is unscathed... our hearts break every single day… We cannot stay silent!

George Floyd was killed at the hands of 4 officers in Minneapolis on Monday. The video is abhorrent. He should be alive. Getting killed by the police is the 6th leading cause of death of young black men in this country. White friends: We can’t let our discomfort, ego, or belief that this work doesn’t include us, prevent us from acknowledging our privilege and that we have the burden of dismantling white supremacy. We do. We can not be complacent. We can not be silent. We need to have this conversation with our families and friend and coworkers. Let’s turn outrage into action. It starts with texting FLOYD to 55156 to demand that the officers who murdered George Floyd are arrested and charged. The link in my bio was compiled by @sarahsophief and has tangible things we can all do to educate ourselves (articles, films, who to follow on social media, organizations that need our funding, etc...) and disrupt the system from which we benefit. #georgefloyd

Police have not identified the officers but Derek Chauvin is the officer who was seen kneeling on Floyd's neck. He's being represented by lawyer Tom Kelly.

(The above story first appeared on LatestLY on May 28, 2020 10:14 AM IST. For more news and updates on politics, world, sports, entertainment and lifestyle, log on to our website latestly.com).