Jumanji: The Next Level premiere was a starry event. What was even more special though was that, this happened to be the first red carpet appearance of Johnson and his wife Lauren Hashian ever since the couple tied the knot. 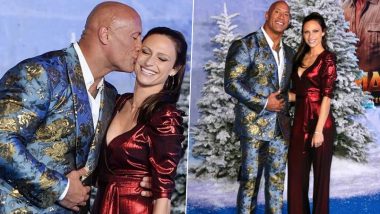 Jumanji: The Next Level is all set to hit the screens soon and we bet you are super excited to catch this film considering the early reactions it received. The film starring Dwayne Johnson, Kevin Hart, Karen Gillan, Awkwafina, Nick Jonas and Jack Black in lead roles recently had a starry red carpet premiere. The event was attended by the lead cast who turned up looking all gorgeous in their fashionable avatars. What was even more special though was that, this happened to be the first red carpet appearance of Johnson and his wife Lauren Hashian ever since the couple tied the knot. Dwayne Johnson and Lauren Hashian New Wedding Pics: The Rock Shares Unseen Photos of Their Hawaiian Ceremony!

Johnson and Hashian got married in a beautiful ceremony in Hawaii over sunset. The couple had posted adorable pictures from their picturesque wedding as fans poured congratulatory wishes. For the Jumanji premiere, The Rock was seen sporting an amazing blue printed suit. The floral design of the suit almost reminded us of the kind of suits that Ranveer Singh and Karan Johar would definitely go for. Lauren looked dazzling in a gorgeous red jumpsuit with a plunging neckline. Check out pictures from the premiere here.

Dwayne Johnson and Lauren Hashian on the Red Capet:

Among other attendees, it surely was sad to see Nick Jonas attend the premiere along without wifey Priyanka Chopra. The actress has been busy with the shoot of her upcoming Netflix film based on Aravind Adiga's The White Tiger. Dwayne Johnson Marries Lauren Hashian: Here's Looking at the Newly-Wed Couple's Romantic Journey Over the Years.

Check Out Nick Jonas, Awkwafina and the Lead Cast at the Premiere:

Jumanji: The Next Level is a sequel to Jumanji: Welcome to the Jungle which had received amazing responses from the audience. The Jumanji franchise has met global success and we expect nothing less from this. The film has been directed by Jake Kasdan and is all set to hit the screens on December 13.

(The above story first appeared on LatestLY on Dec 10, 2019 04:58 PM IST. For more news and updates on politics, world, sports, entertainment and lifestyle, log on to our website latestly.com).