A few days ago, the film had its world premiere, wherein Johnson, also a producer of the movie, paid tribute to Walt Disney who opened the Anaheim park in July 1955 with the Jungle Cruise ride as one of its original attractions, reported Deadline. 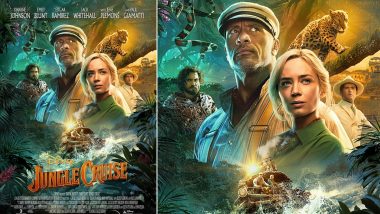 Jaume Collet-Serra directorial Jungle Cruise, which is based on Disney's theme park ride of the same name, will finally release in US theatres and on Disney+ on 30 July. Starring Dwayne Johnson and Emily Blunt, the film centres around a brother (Jack Whitehall) and sister (Blunt) duo, who hire a boat captain (Johnson) to row them down the Amazon river as they are in pursuit of a tree believed to have healing powers. Jungle Cruise: Dwayne Johnson and Emily Blunt’s Film To Release on July 30.

The trailer of the film was well-received by the audience and they cannot wait to see the duo together in the films. Critics got to watch the film today and have shared their thoughts on it. From being called as a 'dull and directionless' film to being called 'a lot of fun', critics say divided in their opinion on Jungle Cruise.

Verve:  "Dwayne Johnson and Emily Blunt don’t have the same kind of chemistry as Brendan Fraser and Rachel Weisz, and the CGI is often shaky and cartoonish in an unpleasant way. But adventure films are meant to be escapism fun, and Jungle Cruise nails that part perfectly. There’s a real earnestness to the whole movie that surpasses some of its very manufactured-by-Disney elements. It can be dopy and it can be misguided, but Jungle Cruise is also just a lot of fun."

The Guardian: "Screenwriters Glenn Ficarra and John Requa (who once gave us Bad Santa and I Love You Phillip Morris) have mashed up The African Queen with Raiders of the Lost Ark, and with what I admit is a surreal splash of Aguirre, Wrath of God. The spark that was there in the opening section disappears and the film splutters out into something directionless and derivative and dull."

The Hollywood Reporter: "Everything about Jungle Cruise points not to creative inspiration in spinning a feature property out of the ride, but to corporate bean counters enthusing, “Hey, it worked for Pirates of the Caribbean!” Following that template to a fault, the project has been in the works for more than 15 years, originally slated to shoot in 2005 for a 2006 release date." Jungle Cruise Trailer: Dwayne Johnson and Emily Blunt’s Pirate-y Adventure Reveals Jesse Plemons As the Villain.

Collider: "Jungle Cruise is incredibly cute. Johnson and Blunt have terrific chemistry and bounce off each other wonderfully. They both see themselves as the true captain of this journey, so they’re constantly trying to one-up the other, which leads to a lot of fun conflict while still retaining the light sense of humour you get from the original ride. Whitehall then provides a nice counterbalance."

Variety: “Jungle Cruise is a movie that implicitly asks: What’s wrong with a little good old-fashioned escapism? The answer is: Absolutely nothing, and “Jungle Cruise” is old-fashioned, expect that it pelts the audience with entertainment in such a lively yet bumptious way that at times you may wish you were wearing protective gear."

A few days ago, the film had its world premiere, wherein Johnson, also a producer of the movie, paid tribute to Walt Disney who opened the Anaheim park in July 1955 with the Jungle Cruise ride as one of its original attractions, reported Deadline.

(The above story first appeared on LatestLY on Jul 28, 2021 08:34 PM IST. For more news and updates on politics, world, sports, entertainment and lifestyle, log on to our website latestly.com).