Mare of Easttown actress Kate Winslet has said she couldn't stop crying when she recently reunited with her Titanic co-star and "really close friend" Leonardo DiCaprio after three years apart. 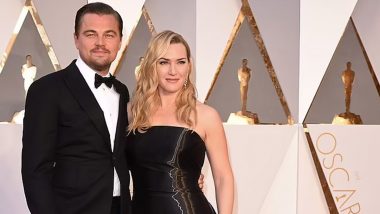 Mare of Easttown actress Kate Winslet has said she "couldn't stop crying" when she recently reunited with her Titanic co-star and "really close friend" Leonardo DiCaprio after three years apart. She said: "I couldn't stop crying. I've known him for half of my life. It's not as if I've found myself in New York or he's been in London and there's been a chance to have dinner or grab a coffee and have a catch-up. We haven't been able to leave our countries. Leonardo DiCaprio: I’ve Looked for a Film With Environmental Undertones.

"Like so many friendships globally, we've missed each other because of Covid. He's my friend, my really close friend. We're bonded for life." Earlier this year, the 46-year-old actress played titular detective sergeant Mare Sheehan in crime drama 'Mare of Easttown', and the star isn't sure if the show will return for a second series, reports femalefirst.co.uk. If she were to reprise her role, Kate believes some of the second season's content should be inspired by some of the recent "atrocities" in the police in the UK and in US. Don’t Look Up: Leonardo DiCaprio Recalls Jumping into a Frozen Lake to Save His Dogs While Filming for Jennifer Lawrence’s Netflix Film.

She added to The Guardian newspaper: "I don't know if I'm going to be playing Mare again. But if we were to do a second season, then for sure these atrocities which have existed in the police force here and in America will find their way into the stories we tell. "You can't pretend these things haven't happened. It's horrible, isn't it? This moment in time. It's horrific. You can hear me, I can't quite find the words because we all feel so betrayed and powerless.

"We have to turn this moment into something meaningful. We have to use our voices on behalf of people who don't have one. That matters to me now in ways that hadn't even crossed my mind in my 20s." In October, Winslet said she had had "conversations" about a potential second season of Mare of Easttown. She said: "I honestly don't have a clear answer. I mean, there have been conversations about it, of course, because of the success of the show really did surprise us."

(The above story first appeared on LatestLY on Dec 23, 2021 02:07 PM IST. For more news and updates on politics, world, sports, entertainment and lifestyle, log on to our website latestly.com).