Loki: 7 Best Moments of God of Mischief in MCU to Rewatch Before Tom Hiddleston Arrives With His Disney+ Series (LatestLY Exclusive)

Loki will be available for streaming on Disney+ Hotstar from June 9, 2021. Directed by Kate Herron of Sex Education fame, the series also stars Owen Wilson, Gugu Mbatha-Raw, and Wunmi Mosaku. 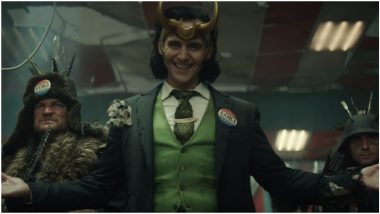 Everyone’s favorite God of Mischief returns next week with his own Disney+ series next week. Marking his first appearance since 2019’s Avengers: Endgame, Loki sees the return of Tom Hiddleston as the titular character. It follows as an alternate version of him that we saw in Avengers: Endgame, as he escapes with the tesseract and finds himself in trouble with The Time Variance Authority aka TVA. Loki: Tom Hiddleston’s Marvel Series to Premiere Two Days Early, On June 9.

So in the celebration of the release of Loki that is arriving on June 9, we are taking a look at the character's seven best moments in the Marvel Cinematic Universe.

After a quick trip to Jotunheim, Loki finally realizes that he is adopted and Odin had lied to him all these years about his lineage. A heartbroken Loki confronts Odin in a scene that’s acted out brilliantly by both Tom Hiddleston and Anthony Hopkins. It’s a turning point for Loki as a character, and one that defines his character going on.

Loki vs. Hulk (The Avengers)

Probably the highlight of the first Avengers film has to be Loki’s interaction with The Hulk. In a scene that’s not much of a fight as it is a one sided beat down, we see Hulk cut short Loki’s speech and pummel him to the ground, as he is just left shocked while Hulk calls him a puny god. It’s hilarious and seeing Loki get ragdolled is just the cherry on top of the cake.

After being broken out of prison with the help of Thor, Loki then impersonates Captain America for a brief bit, in an effort to irritate Thor. The scene is hilarious because Chris Evans cameos for just a mere amount of time, and immediately passes off wonderfully as Loki.

After faking his death and fooling Thor, Loki takes up the form of an Asgardian soldier and goes and notifies Odin of Loki’s “death”. In this he manages to fool Odin and banishes him while taking over Asgard and taking the form of Odin. He then fools Thor again at the end, as he tells him to go and protect Earth, which leaves Asgard free from Thor.

After his not so welcome visit back to Earth with Thor in order to find Odin, Loki is immediately swallowed up by a magic ring, courtesy of Doctor Strange, while he sits and chats with Thor about Odin. In a then really hilarious scene, he is finally dropped back again through the magic ring delivering this hilarious line, “I have been falling for 30 minutes!!”.

His reaction to Thor vs Hulk (Thor: Ragnarok)

Sitting in attendance with The Grandmaster to watch Thor take on the champion, Loki is quickly scared to learn that the champion is no one other than The Incredible Hulk himself. He then attempts to escape from the arena but then is brought back by The Grandmaster. In a hilarious set of events he then cheers on as he sees Thor get pummeled by Hulk as he screams “Yes! That’s how it feels!” recounting his interaction with him from The Avengers.

After the Asgardian ship is captured by Thanos, he quickly overpowers both Thor and Hulk. Then in an effort to save Thor, Loki makes a deal with Thanos to let Thor go and in exchange he will give him the tesseract. He then tries to trick Thanos and in an effort to stab him, is caught by Thanos who chokes him to death and forces Thor to watch him die. It’s a brilliantly acted out scene and showed great character development for Loki.

Loki will be available for streaming on Disney+ Hotstar from June 9, 2021. Directed by Kate Herron of Sex Education fame, the series also stars Owen Wilson, Gugu Mbatha-Raw, and Wunmi Mosaku.

(The above story first appeared on LatestLY on Jun 01, 2021 08:44 PM IST. For more news and updates on politics, world, sports, entertainment and lifestyle, log on to our website latestly.com).