Luca Movie Review: An Endearing Tale of Friendship and Self-Discovery That Has Disney Come Close to Making a LGBTQIA Story (LatestLY Exclusive)

Luca is a Disney-Pixar animated movie, directed by Enrico Casarosa based on a screenplay from Jesse Andrews and Mike Jones. The movie features a voice-cast including Jacob Tremblay, Jack Dylan Grazer, Emma Berman, Marco Barricelli, Saverio Raimondo, Maya Rudolph, and Jim Gaffigan. Luca is streaming on Disney+ Hotstar from June 18. 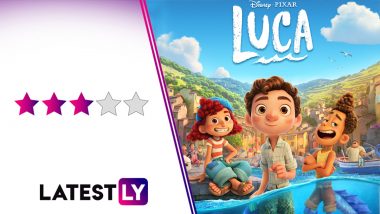 Luca Movie Review: In an interview to Polygon, Luca director Enrico Casarosa had denied reports that his new Disney-Pixar animated movie is about a gay romance. He has made the film based on his childhood experiences in Italy, of friendship and bonding. Now that we have seen the movie, Casarosa was right. Luca isn't a gay love story. And yet, Luca is also the closest a Disney mainstream animated movie comes to telling a LGBQTIA story, without making it so. Confused? Sorry, no pun intended! Luca Trailer Out! Disney and Pixar’s Animated Movie Is Full of Fun and Adventure!

Luca (Jacob Tremblay) is a young sea-monster, living near Italian Riviera, who spends his time herding his school of fish, and wondering how the outside world of humans are. His parents (Maya Rudolph and Jim Gaffigan) are quite protective about him and doesn't want him to venture outside where they are seen as, well, monsters. So Luca looks at the world beyond the water with a mixture of curiosity, trepidation and fear.

Just around then, he meets another teenage sea-monster Alberto (Jack Dylan Grazer), who unlike Luca, has no qualms in traversing on the land. You see, when they come on land, the monsters get human-like features, but whenever they are in contact with water, they revert to their amphibian looks. He encourages Luca to step beyond into the forbidden zone.

With the discovery of his new abilities, Luca and Alberto do all things fun on land, from cliff-diving to riding a bicycle, and dream together of owning a vespa. When they became a bit more daring, they go to Portorosso, the neighbouring town where they meet Giulia (Emma Berman), a friendly girl who takes them into her house and collaborate on a sports contest that could earn them money to buy a 'vespa'.

In its basic essence, Luca is a typical heartwarming movie about two souls on a common journey to the unknown, bonding with each other in the process while defeating a bully. Of course, with a wonderful voice-cast and some enjoyable sequences (Luca's parents trying to find him in Portorosso are my favourite scenes). You know, the standard Disney-Pixar film!

Where it stands out from the rest, is what Luca wants to say, or doesn't actually, about 'self-discovery'. Even if the makers may deny about the film being a LGBTQIA story, you really can't help but think that Enrico Casarosa is playing around with the themes. You can draw so many parallels here. From Luca showing hesitancy to come out of 'water', which could be his closet, to his and Albert's friendship getting stronger over their flights of fancy to their real identities being seen as 'dangerous' by the 'normal' folks.... I could really go on and on about it.

Yes, Casarosa may deny about the film being a gay romance, but Alberto's jealousy about seeing Luca and Giulia bond tells a different story. There's a lot to read between the lines, but it is into that aspect that Luca makes for a fascinating watch. Even if the end, Disney might not have pushed that envelope enough, the light at the end of the tunnel is brighter when it comes to the representation of the sidelined community for the world's biggest studio.

- The 'Self-Discovery' Themes Entwined in an Endearing Narrative

Luca is a very endearing coming-of-age tale of friendship, of facing your anxieties and of discovering a world that is told of being beyond your reach. It still may not push that envelope, but at least, it plays around acknowledging its existence, I think. Luca is streaming on Disney+ Hotstar from June 18.

(The above story first appeared on LatestLY on Jun 16, 2021 09:37 PM IST. For more news and updates on politics, world, sports, entertainment and lifestyle, log on to our website latestly.com).