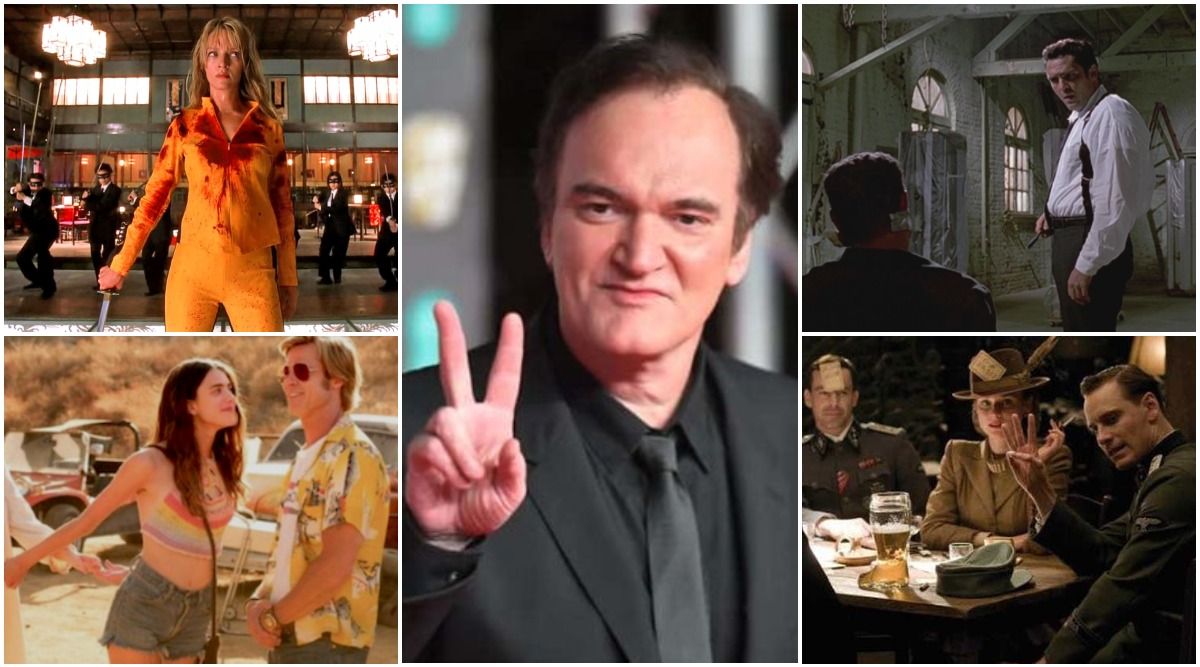 Quentin Tarantino needs no stars in his movies. His name as the filmmaker is enough for a film to be branded as a hot property. And yet from veterans like Robert De Niro, Harvey Keitel and Mike Myers to hotshots like Brad Pitt, Margot Robbie and Leonardo DiCaprio are dying to work with him. In some cases, like with Channing Tatum (The Hateful Eight) and Jonah Hill (Django Unchained), even for an uncredited cameo. The man has only made nine feature-length films in the matter of three decades, and still, each film is special and epic in its own way. Quentin Tarantino Focuses on Fatherhood, Says ‘I Can Be a Little Bit More of a Homebody’.

Tarantino is absolutely adored by movie buffs for his disregard for usual movie rules, love for non-linear narratives, creating long sequences that sometimes lead to nothing and stylish action sequences with enough gratuitous violence. Not to mention, a penchant for black humour. Having made his debut as an indie filmmaker in 1992 with Reservoir Dogs, QT released his ninth film, Once Upon A Time in Hollywood, in 2019, to critical and commercial acclaim and is scouting for his next film, which could possibly be his last, before he retires.

On March 27, 2020, Quentin Tarantino is turning 57. Let's celebrate the birth of one of the most celebrated (and controversial) filmmakers of our generation by listing 10 favourite scenes that we loved from his movies.

Trust Tarantino to mesh brutal violence with a foot-tapping score and expect the audience to watch it with horrific bemusement. Michael Madsen as the sadistic Mr Blonde dancing to Stealers Wheel’s "Stuck in the Middle With You" before cutting a captive cop's hearing appendage will be remembered by the fans for ears, I mean years. Thank your lucky stars, that Tarantino doesn't go the Eli Roth way and tilts the camera away when the actually cutting happens, and we only get to see the bloody aftermath.

It is difficult to pick out special favourite scenes in a film that has many, but for the sake of this list, we have to do that task. Even for something as awesome as Pulp Fiction. I am going with this awesome monologue of Christopher Walken in one of the most memorable cameos ever. Appearing in a flashback scene, he plays a young Butch's grand-dad's army friend, who tells him the most ridiculous and yet the most enthralling story of how he smuggled his father's watch to give it to Butch. The above scene is a masterclass in acting, direction and writing.

Pardon me for taking another Butch Coolidge (Bruce Willis) scene over any scene involving the scene-stealing Samuel L Jackson as Jules Winnfield. But I really can't get the shock over the scene when Butch, hiding from a gangster whom he betrayed, comes home to get his (above) gold watch and finds signs of someone already in there, a machine pistol is in his kitchen. He hears a flush and out comes of toilet is Vincent Vega (John Travolta), presumably sent by the gangster, who sees Butch with the gun. Both of them look at each other, poker-faces. Then the toaster pings, and Vincent gets riddled by bullets to his unceremonious demise. For a movie that didn't follow any sense of time-pattern, the death of a protagonist right in the second act comes as a shocker, once again reiterating the fact that no one is safe in Tarantino-verse.

Tarantino is not just a pro in crafting action or thrilling scenes; with Jackie Brown, he proved that he can do softer scenes too. The final scene of Tarantino's most underrated work is a great example that QT can do subtlety whenever he can, as Jackie (Pam Grier) bids farewell to Max (the late Robert Forster), who refuses to go with her to Madrid with the illegal money. As Jackie drives away, listening to (and later lip-syncing to) Bobby Womack’s "Across 110th Street", we can't help but feel both happiness for her victory and sadness that her romance couldn't be fulfilled.

The Bride vs The Crazy 88s (Kill Bill Vol I)

The Kill Bill series is a fantastic homage by QT to the kung fu movies of the '70s and '80s, though the films have gotten some notoriety thanks to Uma Thurman's revelation of how the filmmaker made her do a fatal stunt and never apologised for it. And when you talk about the first KB film, how can you talk about that awesome action scene in the climax of the movie when The Bride (Thurman) takes on O-Ren Ishii (Lucy Liu) and her Crazy 88 squad. Everything is perfection in the scene, be it the terrific cinematography, the eclectic soundtrack, the amazing action choreography and both Thurman and Liu being total badasses.

If the climactic fight scene in the first film was swashbuckling, to use the more approps term, then this fight sequence between Bride and Elle (Daryl Hannah) is all about ferocity. There is fierceness in how both the ladies fight to kill each other, with the confined space of Budd's trailer is absolutely riveting and keep your own toes, even if that final scene involving a torn eyeball could make you squeamish.

Once Upon a Time in Nazi-Occupied France (Inglourious Basterds)

While I absolutely LOVE Pulp Fiction and Jackie Brown, if there is one QT film that I could watch again and again, that's Inglourious Basterds. The opening scene itself is its most winning moment, setting tone for how unpredictable the film can be (after all, the film gets Hitler killed by American soldiers). The first chapter establishes the ingenuity of Colonel Landa (Christoph Waltz in his Oscar-winning breakout role), the best villain QT created, as he slowly steers an innocuous conversation into a confession that leads to a bloodbath, and inadvertently, create the monster that would lead Hitler to the gates of hell (in this fictional world).

A couple of fascinating things about a QT movie is that there is a good chance that the best scenes in the film may not be reserved for the biggest starry name in the cast, in this case, Brad Pitt. And that Tarantino can build up a great conversation scene and keep you on tenterhooks as to where it will head to. Just like the opening sequence, the scene at the tavern where Allied soldiers disguised as German officers meet their spy, actress Bridget von Hammersmark (Diane Kruger) for their rendezvous, only to realise that the bar has real Nazi soldiers having a party. From a tense game of 'Guess Who?' to an under-the-table Mexican standoff to a stylishly-shot bloodbath, this whole sequences revels in Tarantino flourishes. All because Archie Hicox (Michael Fassbender) chose the wrong three fingers.

I assume you expected me write about the scene where Leonardo DiCaprio's vile Candie delivers that dinner speech. Or Candie getting killed by Schultz (Waltz), who is promptly shot down. Or the violent Candieland massacre. Nope, I am opting for a scene that could have easily ended up among the deleted sequences, and yet becomes one of the memorable scenes in the film. Purely because it is QT at his most hilarious bit. The sequence begins with an awesome operatic score before delving into some hilarious black humour as the KKK spar with each other on the quality of their bag-masks. There is also Jonah Hill in a cameo, so that's another bonus.

Booth Meets Manson Cult (Once Upon A Time in Hollywood)

Once Upon A Time in Hollywood is perhaps Tarantino's 'light'-est film, though he returns to the violent excesses in the final 10 minutes or so. While the movie is a glorious ode to the cinema of the '60s, there is one scene in the middle of the film that almost brings your heart to your mouth with its palpable tension. It's the scene where Cliff Booth (Brad Pitt) while dropping Pussycat (Margaret Qualley), meets her fellow-mates, the murderous Manson cult, taking abode at the ranch of an old acquaintance. Tarantino, using the knowledge of the viewers of the Mansons, steadily pumps up the terseness, with Booth meeting and brushing off the hostility of the cult members, with Dakota Fanning in sparkling form there. But Booth is to OUATIH, what Clint Eastwood's The Man With No Name is to in The Good, The Bad and The Ugly, so he not only comes out unscathed, but he also beats the shite out of a Mansonite.