Rupert Grint Birthday: 5 Movies Outside Harry Potter Franchise That You Must Watch

Rupert Grint is celebrating his 32nd birthday today. The actor shot to fame as he played Ron Weasley in the Harry Potter films. While his filmography outside Harry Potter franchise is limited, it is still worth noting. Have a look. 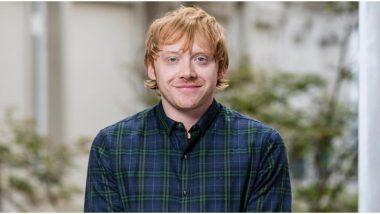 Rupert Grint is celebrating his 32nd  birthday today. The actor shot to fame as he played Ron Weasley in the Harry Potter films. While his filmography outside Harry Potter franchise is limited, it is still worth noting. Have a look. He is a fantastic actor with a very unique screen presence. He is cute, awkward and dramatic, when required. The actor has expressive eyes that help him put across every emotion effortlessly. Rupert Grint Next in Line to Slam Harry Potter Author JK Rowling for Her Transphobic Tweets.

Talking about his Harry Potter days, Rupert Grint has said, " find it really difficult to look back. With this show, I’ve seen the first episode, so it’s very different for me, and that’s exciting. I’ve never felt the way I did with this when I was waiting for the scripts. I was kind of addicted to them, so this definitely feels like very new ground for me." Here Are The First Photos Of Rupert Grint And Georgia Groome's Newborn Girl.

Rupert starred in this comedy alongside  Ron Perlman by the French director Antoine Bardou-Jacquet. The movie received a mixed response from the critics. But, the comedy in the film was not everyone's cup of tea, so we will suggest that you check it out.

In 2006, the actor joined Julie Walters for this comedy-drama. The movie is a story about a shy teenage boy and an ageing eccentric actress.

Rupert's film failed to attract distributors after its premiere at Berlin Film Festival. Fans of Rupert Grint ran a campaign and it helped the movie get a distributor in the UK.

Grint starred in this ensemble black comedy. The film has 33% rating on Rotten Tomatoes. But, we will suggest that you check it out and take your own call about how the movie is.

The actor portrayed the real-life Lieutenant R.S. Bostock. The film is inspired by and loosely based on real-life events that occurred in Norway during the war.

Rupert was last seen in the Apple+ series, Servant, produced by M Night Shyamalan.  The horror series was well-recieved and it has been renewed for a second season.

(The above story first appeared on LatestLY on Aug 24, 2020 01:55 PM IST. For more news and updates on politics, world, sports, entertainment and lifestyle, log on to our website latestly.com).