Harry Potter actors are coming forward to slam JK Rowling for her transphobia and are also extending their support to the trans community. 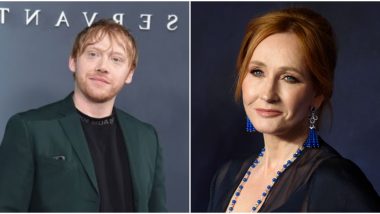 JK Rowling sure knows how to brew a controversy out of her tweets. The famous Harry Potter author who gifted us a childhood that we'll be forever grateful for was recently and rightfully slammed for her transphobic tweets. The author faced backlash last week after saying she had issues with the phrase, 'people who menstruate.' "I'm sure there used to be a word for those people. Someone help me out. Wumben? Wimpund? Woomud?" Rowling tweeted and what followed next was her slamming on social media.

While earlier Harry Potter actors Daniel Radcliffe and Emma Watson had criticised her thinking by extending their support to the trans community, the recent addition was Rupert Grint. "I firmly stand with the trans community. Trans women are women. Trans men are men. We should all be entitled to live with love and without judgment. I firmly stand with the trans community and echo the sentiments expressed by many of my peers," said the actor in his interaction with Times. Harry Potter Actress Emma Watson Takes a Stand Against JK Rowling's Transphobic Tweets.

Radcliffe had even apologised to all her Harry Potter fans if they felt their experience was tarnished and said he was deeply sorry for their pain. The author had earlier defended her tweets by saying she had spoken about transgender issues in part due to her experience of domestic abuse and sexual assault. Following the social media outburst against her, a school in West Sussex has dropped plans to name a house after Rowling. The authorities said they did not wish to be associated with her views.

(The above story first appeared on LatestLY on Jun 13, 2020 02:03 PM IST. For more news and updates on politics, world, sports, entertainment and lifestyle, log on to our website latestly.com).