Ryan Reynolds Takes a Jibe at Hugh Jackman Again, Asks If Logan Actor Sleeps With a Wig On 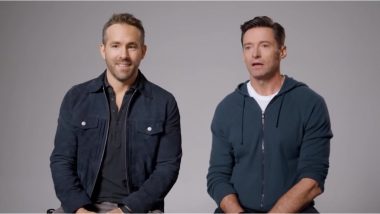 Ryan Renolds and Hugh Jackman have earned a reputation for exchanging friendly, but near-brutal, jibes at each other on social media. Ryan plays Deadpool in films and Hugh plays Wolverine, the two characters are frenemies in the cinematic universe. In the latest, Ryan has made fun of Hugh by calling him bald. Well, not exactly in those words. So, Hugh is the face of a new coffee ad. He appears in a new commercial, narrated by Ryan. The Logan actor wakes up, pets his dog, smiles and smells the coffee. Ryan Reynolds Declares 'Truce' Between Him And Hugh Jackman But The Wolverine Actor Still Thinks Reynolds Is An A*&%@le! [Watch Video].

Ryan retweeted the ad and wrote, "You sleep with the wig on?" Ouch. You can hope that retort is on its way from Hugh's keyboard.

The commercial is quite funny. While endorsing the coffee, Ryan clarifies that the dog in the ad is not included.

Check Out The Exchange Between Hugh and Ryan Here:

Recently, Ryan and Hugh put a pause on their feud to come together for a charitable "All In" challenge to help the people amid coronavirus outbreak.

Before the list of jibes exchanged by the two is very long. On Hugh's 24th wedding anniversary, Ryan asked his wife Deb to "hang in there" on Instagram. Ryan Reynolds Crashes Hugh Jackman’s OG X-Men Online Reunion As You Would Expect Deadpool To Do! (Watch Video).

On X-Men Day, when Hugh posted about playing the iconic role of Logan, Ryan posted about the character's death in the films as Spoiler Alert. Ryan has also called Hugh selfish for not doing a Wolverine-Deadpool crossover movie.

The two actors have worked together in the film X-Men Origins: Wolverine. The iteration of Deadpool in the film was not well received by fans and critics. In his standalone film Deadpool 2, Ryan's character revisits the previous film to shoot off his own character as a meta-joke. Well, a better reunion of Wolverine and Deadpool is certainly what fans would love.

(The above story first appeared on LatestLY on Sep 15, 2020 07:21 PM IST. For more news and updates on politics, world, sports, entertainment and lifestyle, log on to our website latestly.com).