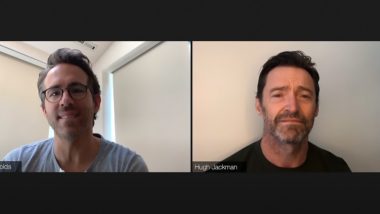 The star cast of the original "X-Men" film had a virtual meeting on Saturday, and actor Ryan Reynolds crashed the reunion, with a few other stars who had appeared in subsequent sequels of the franchise. "X-Men" stars Hugh Jackman, Halle Berry, Famke Janssen and P Patrick Stewart had reunited via Zoom as part of Global Citizen: Unite For Our Future benefit concert. It's kind of surreal you guys, I can't believe it's been 20 years since the first aX-Men' movie," Jackman was saying, according to a report in people.com, when Reynolds popped on the screen. Ryan Reynolds and Blake Lively Donate $200,000 to NAACP Legal Defense Fund Amid George Floyd Protests

Seeing Reynolds, Jackman continued: "Ryan, the cast and I were all just reminiscing about the movie that we're in together." Then, he tried to cordially get Reynolds out of the picture, saying: "See ya, Ryan." Reynolds, however, was in no mood to budge. Rather, the actor, who joined the franchise in his popular avatar of Deadpool in the 2009 release, " X-Men Origins: Wolverine", told Jackman that he had actually invited a few others from various other films of the franchise. That was when Sophie Turner and James McAvoy appeared on screen. Ryan Reynolds Sees Great Potential in Deadpool Franchise, Says It Would Be ‘Explosive and Amazing’ If the Superhero Becomes the Part of MCU

"Oh sorry, I actually thought this was a ‘Game Of Thrones' reunion," Turner joked, and quickly left. Janssen and Berry left next, saying they had a James Bond reunion to attend. Soon, McAvoy claimed he had to attend a "Split" reunion, while Stewart cited "Star Trek." Addressing a hapless Jackman, Reynolds them said: Just you and me, Logan. You know what that makes this a reunion for?" "X-Men Origins Reunite!" declared Liev Schreiber, who plays Sabretooth in the series, to Reynolds' question after suddenly popping up on the screen for a few seconds and vanishing instantly.

(The above story first appeared on LatestLY on Jun 29, 2020 01:19 PM IST. For more news and updates on politics, world, sports, entertainment and lifestyle, log on to our website latestly.com).