Sacha Baron Cohen turns 49 today. The following quotes will be a compilation of things that have come out of Sacha's mouth on various occasions. 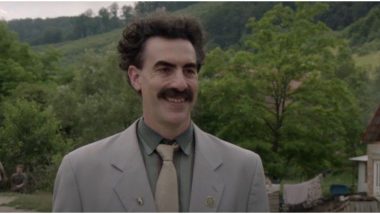 Sacha Baron Cohen turns 49 today. The actor has established a niche for himself in the entertainment industry. He doesn't abide by the rules. He is quite handsome, but not in one project has he played to the gallery with vanity. He has not shied away from calling out the very industry he is a part of. He has definitely pulled back from taking jibes at politics and culture. As we said...niche. Well, he has also invited a lot of lawsuits thanks to his eccentricity. Moving past this awkward sentence, we should tell you that, as the headline suggests, we are going to talk about the funniest lines by the actor. Borat Subsequent Moviefilm Trailer: The Sequel Of Sacha Baron Cohen's Film Is Ready To Release And It Looks Interesting (Watch Video).

These lines are not only from his movies. Sacha remains in character - at least one of his many - mostly when he's making a public appearance. For instance, he hosted the backstage of London Fashion Week as his character Da Ali G. Then there's Borat. So, the following quotes will be a compilation of things that have come out of Sacha's mouth at various events. That sounds wrong. Police Called On Sacha Baron Cohen After He Pranks Donald Trump's Adviser Rudy Giuliani.

"Sex can lead to nasty things like herpes, gonorrhoea, and something called relationships."

"Look at the evil people in the world: Saddam Hussein, Hitler, Stalin. What do they all have in common? Moustaches!"

"I love it when women go to school. It's like seeing a monkey on rollerskates. It means nothing to them, but it's so adorable for us."

"I can make my balls look like Sir Ian McKellen."

"When you chase a dream, especially one with plastic chests, you sometimes do not see what is right in front of you." Sacha Baron Cohen Crashes a Right-Wing Militia Rally and Makes The Crowd Sing Racist Lyrics (Watch Video).

Well, Sacha is not always not serious. "I'm not going to claim that everything I've done has been for a higher purpose. Yes, some of my comedy - OK, probably half my comedy - has been absolutely juvenile... and the other half completely puerile," he once said. We are going to leave you with this quote and let you find a deeper meaning to it. A very happy birthday, Sacha. Also, do not forget that Borat sequel is dropping on Prime soon.

(The above story first appeared on LatestLY on Oct 13, 2020 09:30 AM IST. For more news and updates on politics, world, sports, entertainment and lifestyle, log on to our website latestly.com).