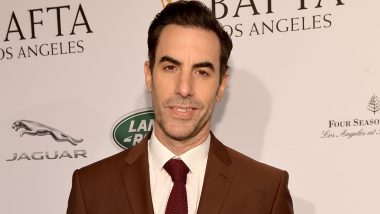 English actor, Sacha Baron Cohen pulled off a new stunt. On Saturday (June 27), the multi-talented comedian made his way to a conservative rally in the US state of Washington which was organised by a group called Washington Three Percent. Well, that's not it, as Cohen stood up on the stage dressed as a pot-bellied singer and got the attendees to sing along some disrupting racist lyrics about Barak Obama, Hillary Clinton and Dr. Anthony Fauci. The rally was titled as 'March for Our Rights 3'. Sacha Baron Cohen Takes a Dig at Facebook Creator Mark Zuckerberg for Spreading 'Nazi Propaganda' With a Powerful Statement at Golden Globes 2020 (Watch Video).

In disguise, Baron Cohen was spotted performing with a band and made the crowd repeat what he sang. A part of his song highlighted about injecting Obama, Clinton and Fauci with the 'Wuhan flu' and chopping up members of the World Health Organization “like the Saudis do.” Stranger Things Actor Finn Wolfhard Confesses of Eating like a 4-Year-Old Kid.

Dressed as a hillbilly, Sasha Baron Cohen infiltrated a rally being held by “The Washington State Three Percenters” - a right wing militia group — and took over the stage.

For the ones living under the rock, Sacha is known to be a prankster and has previously said mean and embarrassing things on camera too. Reportedly, the organisers tried their best to stop his performance but couldn’t surpass the security that was placed at the area. Stay tuned!

(The above story first appeared on LatestLY on Jun 29, 2020 12:23 PM IST. For more news and updates on politics, world, sports, entertainment and lifestyle, log on to our website latestly.com).