The trailer is sort of a surprise release ahead of the US Presidential elections. 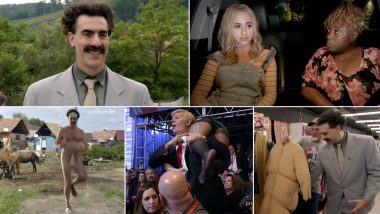 Sequels are always welcome by the audience! Now, it is time to watch the sequel of Borat Cultural Learnings of America for Make Benefit Glorious Nation of Kazakhstan. Also simply called as Borat, it is a comedy film directed by Larry Charles and starring Sacha Baron Cohen in the lead. The trailer of sequel named as  Borat Subsequent Moviefilm of the same is now here and it is as interesting as ever. The Trial Of The Chicago 7 Trailer: Sacha Baron Cohen, Eddie Redmayne, Yahya Abdul-Mateen II Impress in Aaron Sorkin's Political-Legal Drama (Watch Video).

The trailer is sort of a surprise release ahead of the US Presidential elections. It is streaming on Amazon Prime on October 23, 2020 and fans could not be happier. The sequel of the cult classic of 2006 looks equally interesting with lots of chuckle worthy moments stored in for the cinephiles! Watch trailer below.

As per the reports, the sequel was shot in a 'secret way' right after the lockdown rules were eased. The shoot happened with no noise and even completed amid the whole pandemic situation. So, what are your thoughts on Borat Subsequent Moviefilm?

(The above story first appeared on LatestLY on Oct 01, 2020 09:03 PM IST. For more news and updates on politics, world, sports, entertainment and lifestyle, log on to our website latestly.com).