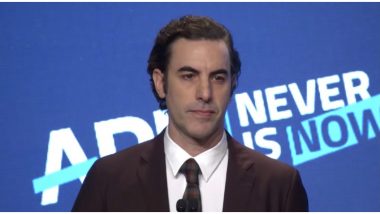 Weren't we just talking about Sacha Baron Cohen? The comedian recently crashed a right-wing militia rally and made the crowd sing racist songs. Now, he pranked former New York City Mayor Rudy Giuliani who is now a close advisor of POTUS Donald Trump.  As per reports, Mark arrived at a  Hotel in Manhattan on Tuesday after he was invited for an interview on the administration’s COVID-19 response. Sacha Baron Cohen Crashes a Right-Wing Militia Rally and Makes The Crowd Sing Racist Lyrics (Watch Video).

As the camera began rolling, a man crashed the interview.  "This guy comes running in, wearing a crazy, what I would say was a pink transgender outfit," said Giuliani. "It was a pink bikini, with lace, underneath a translucent mesh top, it looked absurd. He had the beard, bare legs, and wasn’t what I would call distractingly attractive."

The Mayor has once dressed in drag for a New York charity event.

"This person comes in yelling and screaming, and I thought this must be a scam or a shake-down, so I reported it to the police. He then ran away," the former Mayor added. While the police arrived at the scene, no arrests were made. As per reports, the video was part of Cohen's TV show, Who Is America. Sacha Baron Cohen Takes a Dig at Facebook Creator Mark Zuckerberg for Spreading 'Nazi Propaganda' With a Powerful Statement at Golden Globes 2020 (Watch Video).

Giuliani told Page Six that he was a fan of some of Cohen’s films, mentioning Borat.

The show has landed Cohen in trouble already in the past.  Former U.S. Senate candidate Roy Moore has filed $95million defamation lawsuit against Sacha Baron Cohen, Showtime and CBS.  During his appearance on Who Is America, Moore was subjected to a joke by Cohen where it was implied that former is a paedophile.

(The above story first appeared on LatestLY on Jul 09, 2020 05:02 PM IST. For more news and updates on politics, world, sports, entertainment and lifestyle, log on to our website latestly.com).