Tessa Thompson Birthday: 5 Of Her Best Scenes as Valkyrie from The MCU

To celebrate her portrayal as Valkyrie and to mark this special day of hers, here's recalling some of her best scenes from the MCU. 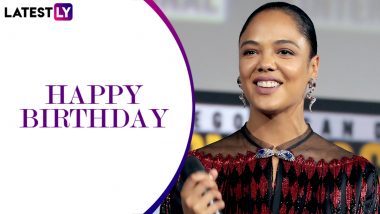 Tessa Thompson, the Valkyrie of MCU, celebrates her birthday on October 3. The character quickly became a fan favourite in the Marvel Cinematic Universe and is now on her way to becoming a prominent part of the storyline. While Valkyrie as a character is strong in herself, Tessa's portrayal certainly added dollops of extra charm to it. Her chemistry with Chris Hemsworth was much appreciated and the strong liking towards her character prompted the makers to include her in the future Marvel movies as well. Brie Larson Posts Homo-Romantic Sketch with Tessa Thompson’s Valkyrie; Fuels Gay Captain Marvel Rumours.

Tessa Thompson as Valkyrie was adored and she brought a refreshing change to the star cast. She was first introduced in Thor: Ragnarok and was later seen in Avengers: Endgame when she joined the Avengers in the final battle against Thanos. To celebrate her portrayal and to mark this special day of hers, here's recalling some of her best scenes from the MCU. Thor: Love And Thunder - From Natalie Portman's Return To Valkyrie's LGBTQ Reveal; All You Need About Cast and Release Date of Chris Hemsworth's Film!

The Time She Reminisced Her Fight With Hela

When She Meets Hulk in Avengers: Endgame

And Finally, When She Joins Avengers in Avengers: Endgame

There are reports that Valkyrie, being gay, will romance Carol Danvers aka Captain Marvel in the future Marvel movies. And if these reports do come true, we'd love to her romancing Brie Larson. But until then, here's wishing her a fabulous year ahead. Happy Birthday, Tessa Thompson!

(The above story first appeared on LatestLY on Oct 03, 2021 09:00 AM IST. For more news and updates on politics, world, sports, entertainment and lifestyle, log on to our website latestly.com).