Thor: Love And Thunder - From Natalie Portman's Return To Valkyrie's LGBTQ Reveal; All You Need About Cast and Release Date of Chris Hemsworth's Film!

Thor 4 is happening! Director Taika Waititi will once again join forces with Marvel Studios for Thor: Love and Thunder. The film will see Chris Hemsworth, Tessa Thompson and Natalie Portman reprise their roles. Here are all the details about the film! 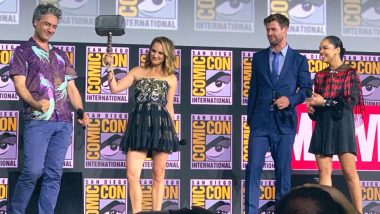 All you must know about Thor: Love and Thunder (Photo Credits: Twitter)

Chris Hemsworth may have taken a break from films for a brief time as he wants to chill with his family but he sure will have a thunderous return! The actor has once again teamed up with Thor: Ragnarok director Taika Waititi for the fourth part of the Thor movie. Called Thor: Love and Thunder, the film will see Hemsworth reprise his role along with Tessa Thompson as Valkyrie. But the best bit of them all is how they will be bringing back a pivotal character from Thor's life (not Loki), Jane Foster! For those who have followed the God of Thunder's story carefully, you probably know about his ladylove, Jane Foster (played by Natalie Portman). Marvel Phase 4 Films Revealed at San Diego Comic-Con 2019! From Black Widow to Thor 4, Here’s the Complete List of Films and TV Series

At the ongoing San Diego Comic-Con panel, Marvel Studios made some big revelations. As they introduced the next slate of their upcoming films, they did introduce the cast and tentative release dates of the films. The cast of Thor: Love and Thunder were very much present for the event along with director Taika Waititi. You probably remember how Jane Foster sort of went AWOL from the Marvel Cinematic Universe after Thor: The Dark World. But thanks to Avengers: Endgame, where they had to go back in time to bring back a few essential stones, once again Jane presented herself. Of course, in the movie, it was just an appearance as a flashback. Little did anybody expect her to once again return for a full-fledged role. Fans React to Natalie Portman Playing Female Thor in Thor: Love and Thunder and Not Everyone Is on Board with It

The events of Avengers: Endgame saw Thor lave the New Asgard in the hands of Valkyrie. It is still unclear how Thor and Jane's paths cross. As per the storyline of Marvel's Original Sin, it was revealed that Foster is battling cancer and is deemed worthy to wield the Mjolnir when Thor was unable to. Basically, she is dubbed as the Goddess of Thunder. There are high chances that Foster will wield the hammer and support her love, God of Thunder, as they face new challenges. MCU Phase 4: From Black Panther 2 to Avengers 5, Eight Surprising Snubs in Marvel’s Next Lineup of Movies and Disney Plus Series

Speaking about her role, Portman stated, "It's been so exciting to get to be part of this whole Marvel universe and get to see all of these incredible new characters be revealed to audiences every year and, of course, to have women in science be front and centre is incredible, to spread that culture throughout the world."

From what we remember, in Thor: Ragnarok, as Thor and Loki reached the earth to search for their father, Odin, they did run into people who claimed how Thor and Jane broke up. We sure are curious to know how their paths will cross yet again! Meanwhile, what we do know about the upcoming film is how Valkyrie will be embracing her sexuality as a queer. It would be interesting to see how things work out in the upcoming film and whether Waititi will be able to bring back the same humour to this script as well. Thor: Love and Thunder will release on November 5, 2021.

(The above story first appeared on LatestLY on Jul 21, 2019 12:15 PM IST. For more news and updates on politics, world, sports, entertainment and lifestyle, log on to our website latestly.com).