The Green Knight has received critical acclaim as it rakes up a 94% on Rotten Tomatoes and a score of 89 on Metacritic. Reviews have been overwhelmingly positive with many calling it one of the best Arthurian tales ever told on screen. Read on. 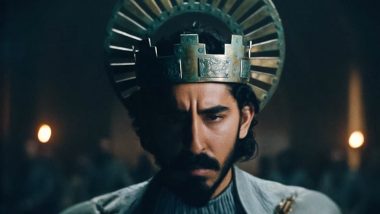 The Green Knight is one of the most highly anticipated films of the year. Directed by David Lowery and starring Dev Patel, The Green Knight tells the story of Sir Gawain, King Arthur's headstrong nephew, who embarks on a quest to confront the eponymous Knight, a gigantic tree-like creature. Delayed thanks to the COVID-19 pandemic, The Green Knight is finally set to release this Friday. The Green Knight from its trailers has looked like that A24 has another visual treat on its hands, and if early reviews are to go by, then we can be assured that The Green Knight delivers on all fronts. The Green Knight Trailer: Dev Patel Fights for Honor As He Battle Giants With a Big Axe! (Watch Video).

The Green Knight has received critical acclaim as it rakes up a 94% on Rotten Tomatoes and a score of 89 on Metacritic. Reviews have been overwhelmingly positive with many calling it one of the best Arthurian Tales ever told on screen. You can check out some of the reviews down below. Dev Patel to Narrate Nat Geo’s Two-Part Documentary Series on India.

Indie Wire: "A mystical and enthralling medieval coming-of-age story in which King Arthur’s overeager adult nephew learns that the world is weirder and more complicated than he ever thought possible, “The Green Knight” is an intimate epic told with the self-conviction that its hero struggles to find at every turn. Stoned out of its mind and shot with a genre-tweaking mastery that should make John Boorman proud, it’s also the rare movie that knows exactly what it is, which is an even rarer movie that’s perfectly comfortable not knowing exactly what it is."

Roger Ebert.com: “The Green Knight asks a lot of its viewers—to stay engaged with what could be called its slow pace, to consider its themes without them being underlined for easy consumption, to be willing to see a film about famous knight that contains very little in the way of traditional heroism. It is scary, sexy, and strange in ways that American films are rarely allowed to be, culminating in a sequence that cast the whole film in a new light for this viewer. We're all just sitting in that banquet hall, listening to the story requested by King Arthur, told by a master storyteller."

The Guardian: "For us, the pleasure of accompanying him on his mission comes in part from drinking in the breathtaking Irish-location-shot scenery, emerald-lush in some tracts and volcanically barren in others. That this eye-popping visual bounty would be a mere side attraction attests to how much movie Lowery jam-packs into two hours, the untamed gorgeousness easing us through the early-Christian arcana, tangled personal development, and occasional formal experiments with time. To disguise a film so artful and boldly uncommercial as mass-market entertainment for those still hurting from Game of Thrones’ conclusion – there’s your act of heroism."

Forbes: "The picture pokes at (without being “yellow highlighter” about it) our expectations of both Hollywood heroes and our notions rooted in old-school traditions of masculinity and manhood. It’s not going to be for every viewer. Again it’s not a mega-budget, action-packed thrill ride. But for those on its wavelength, The Green Knight is a true A24-style epic worth relishing, ideally, on the biggest big screen you can find."

Den of Geek: "Despite being based on a well-worn folk tale, The Green Knight is not an easy movie to follow once Gawain accepts his fate and leaves Camelot behind for a wilderness drenched in magic and weirdness. Shrouded in mysteries, both medieval and modern, it is designed to confound and intrigue, and probably be viewed more than once. It is a bit like discovering an ancient tome of witchcraft that’s not intended for young eyes. You’re not entirely sure what its incantations mean, but you cannot look away. For some that will be infuriating, but I found it spellbinding."

From these early reviews, it definitely seems like The Green Knight is a magical tale that will need some patience, but once you get into the thick of it, you will learn to fully appreciate it. The Green Knight starring Dev Patel, Alicia Vikander, and Joel Edgerton is scheduled to release on July 30, 2021.

(The above story first appeared on LatestLY on Jul 27, 2021 06:36 PM IST. For more news and updates on politics, world, sports, entertainment and lifestyle, log on to our website latestly.com).