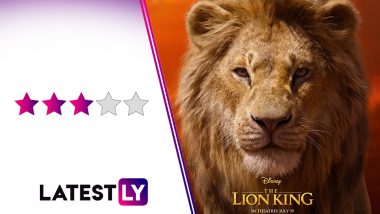 The Lion King Movie Review: After making the revolutionary The Jungle Book remake in 2016, Jon Favreau comes up with his take on another Disney animated classic, The Lion King. The trailers told us the one thing we expected to happen, and the movie doesn't lie at that - the 2019 version of The Lion King is visually stunning, perhaps even better than The Jungle Book. But in the gap of three years between the two movies, something went missing as Favreau moved from one Disney property to another. You can call that missing ingredient whatever you want, I want to call it as, 'soul'. The Lion King European Premiere: Beyonce, Jon Favreau, Seth Rogen, Elton John, Pharrell Williams Brought Their Panache To The Red (Well, Golden) Carpet!

Before I get into the nitty-gritty of it all, let's discuss what's the plot is all about. Well, premise-wise, The Lion King remake is nearly the same retread of the original film. In the Pride Lands of Africa, Little Simba (JD McCrary) is born to Mufasa (James Earl Jones), the King of the Jungle, and Sarabi (Alfre Woodard). As a little cub, Simba is often reminded by everyone around him that that he is the next King, but his childish, inquisitive nature often lands him a couple of tight spots. His outcast uncle Scar (Chiwetel Ejiofor) takes advantage of that to use Simba as bait and take the power of the Pride Lands for himself.

Ridden with guilt, Simba makes himself an outcast and leave his kingdom to the lands beyond. On the way, he befriends a warthog Pumbaa (Seth Rogen) and a meerkat Timon (Billy Eichner) who take him under their carefree wings. After a few months, a grown-up Simba (now voiced by Donald Glover) is enjoying his time at his new home. But his past returns in the form of his childhood friend Nala (Beyonce Knowles) who reminds him of the legacy that he has to carry out. Reluctant at first, Simba gets an awakening when he reflects on his father's memories and he is determined to win back his kingdom from Scar, come what may.

The 1994 film was a cinematic gem in two-dimensional animation, a movie that still remains fresh in our minds. That is, if you have bothered to see it. So with the remake, it is kind of exciting to see The Lion King made with photorealistic effects (using motion capture and VR/AR technologies), rendering those animals and their environs seeped in realism. To even complain about a minor niggle in the CGI used here would be me drenching myself in cynicism, so effectively beautiful the effects are. From the fur on Mufasa's mane waving in the breeze to little Simba walking through seemingly endless dunes of sand with the wind blowing across them - you really don't want to take your eyes off the screen. Every little thing in the film, from the grass to the insects to the mighty pachyderms, and even the ugly hyenas, feels so real. The lighting and the cinematography do a great job in enhancing the effects. My favourite scene is the climactic fight between Simba and Scar atop a cliff that overlooks a forest fire. The whole scene looks so damn stunning.

These visuals make The Lion King an engaging watch but the real question here is, is that enough? Like I mentioned before, the premise is almost the same as the original movie, so there is nothing to harp on there. Still some scenes in the remake are effective, like Mufasa's scenes with Simba in the start. Or any scene involving the scene-stealing duo of Pumbaa and Timon.

But will I revisit this movie later? Personally, I would rather stick to rewatching the 1994 movie for reasons that made it a classic. For there is little CGI can do, when your product doesn't borrow the same depth in storytelling as in the original. Shah Rukh Khan Fans Troll Pakistani Actor Shaan Shahid After He Criticises the Actor for The Lion King’s Hindi Dubbing.

Speaking of those limitations, the best example that I can give is that no matter how impressively rendered animals look in the film, they can't bring out the same kind of emotions as the characters in an animated movie. If the expressions on the animal's face can't reflect the seriousness of a situation, including a mightily affecting death scene, then we may have to question the purpose of the remake. Other than to show off the incredible CGI work your studios can boast of. Remember Nala's 'come hither' glance thrown at Simba in the 1994 film? 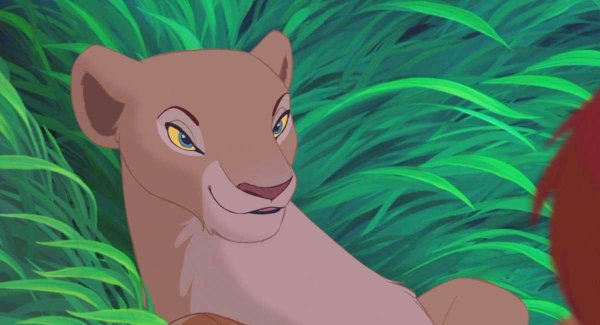 That's what is sorely missing here because the animals aren't animatedly expressive enough! There is a limit to what a voice-cast can do, no matter how talented they are.

The reason The Jungle Book remake got away with this was that the animated movie it remade was not as iconic or recent as The Lion King. Also, it had a human character in Mowgli, who became our emotional focal point of the film. Unlike The Jungle Book, The Lion King remake is not a live-action film (as many are incorrectly interpreting it as). It is a fully CGI-rendered film, but The Lion King shares the idea of its existence with that of The Jungle Book. Or for the matter with any live-action remakes, Disney made of its properties in the past three years. From Beauty and the Beast to Dumbo to Aladdin. In the process, the soul of the story is getting ripped off in the process. Just like how Voldemort's soul gets ripped off every time he murders someone. Okay, that's too morbid a comparison. Also, different studio property.

Major blame for that soul-stripping goes to the writing and the workmanship-like approach. I got the feeling that the makers expected us to be familiar with the original film, and therefore only focussed on getting it CGI-rendered. There is way too much time spent in the scenes between Mufasa and Simba in the start, while the scenes with the adult Simba feel pretty rushed. Including the romance with Nala, that comes out nowhere and looks perfunctory. Because the original movie had that scene. The same goes for the songs too. Sample this, the romantic ditty 'Can You Feel The Love Tonight?' is placed during daytime in the remake, making the lyrics redundant.

Watch The Trailer of The Lion King Remake Here:

The same goes for the voice cast. James Earl Jones's majestic voice continues to reverberate with you as it was in the 1994 film. Scar is effectively malevolent, thanks to Chiwetel Ejiofor's impressive work and so is his rendition of the song 'Be Prepared'. Pumbaa and Timon light up the screen and your face every time they appear, and that's all due to Seth Rogen and Billy Eichner's terrific playful bantering. So what if they halt the proceedings and take away the spotlight from the main lead! Every scene involving the duo (they get the best lines, after Mufasa's deep lessons) are the ones I found the most enjoyable in the movie. They also make the songs -  "Hakuna Matata" and "The Lion Sleeps Tonight" -  the only two tracks the most fun to watch!

The talented Donald Grover is criminally underused as Simba despite being the main lead here. He sure sings pretty well, which is something every Community and Atlanta fan knows. But Glover doesn't get establish himself with authority as the future King of the Pride thanks to how rushed his character development was. Beyonce was quite okay as Nala. Alfre Woodard and John Kani (again underused as Rafiki) are adept in their parts. Some more fun moments come from two squabbling hyenas, voiced by Keegan-Michael Key and Eric Andre. Florence Kasumba lends a suitably malicious aura to the sneaky leader of the hyena pack, Shenzi. John Oliver is also good as Mufasa's faithful, prim hornbill, Zazu.

PS: I never thought about this when I had watched The Lion King as a child. But after eight seasons of Game of Thrones, I had to ask this now - aren't Simba and Nala like brother and sister? Considering that there was no other male lion in the pride apart from Mufasa, who else was Nala's father? Ewww!

- The Impressive CGI and Cinematography

- The Voice-Cast, especially for Pumbaa and Timon

- Not All Songs Are Effective

Like with The Jungle Book, Jon Favreau once again scores visually with his remake of The Lion King. The stunning imagery will captivate you as long as the movie lasts and the voice-cast is excellent. And yet, The Lion King remake ends up being unmemorable because the visuals enhancements come at the sacrifice of a lack of depth in storytelling and rushed character development. Watch the remake for the visuals, revisit the original for the missing magic!

(The above story first appeared on LatestLY on Jul 16, 2019 12:52 AM IST. For more news and updates on politics, world, sports, entertainment and lifestyle, log on to our website latestly.com).