The Matrix Resurrections is the fourth films in The Matrix franchise and is directed by Lana Wachowski. It stars Keanu Reeves, Carrie Anne-Moss, Yahya Abdul Mateen-II, Jonathan Groff, Priyanka Chopra, Jessica Henwick and Neil Patrick Harris and is playing in theatres right now. 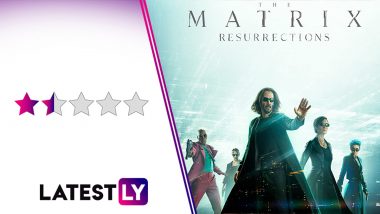 The Matrix Resurrections Movie Review: I never really was that big of a Matrix fan. Admiring that first film all those years ago and loving it, for some reason I never delved deep into the other two films. But since The Matrix Resurrections was coming out, I thought I would finally watch those films. Nonetheless to say they were a convoluted mess. Then comes along the trailers for The Matrix Resurrections that promise a return to form, and the promos looked quite damn good. I go to the cinema all excited, grab a tub of popcorn and soda, and my God, did I leave underwhelmed! It was a disappointing film through and through and you know something is wrong when the best part about your viewing is when the theatre accidentally played The Batman trailer twice. The Matrix Trivia: Learn How the Iconic Code For Keanu Reeves’ Classic Sci-Fi Film Originated From a Sushi Recipe!

The Matrix Resurrection picks up 20 years after The Matrix Revolutions and tells the story of Neo re-entering the Matrix along with the help of a new Morpheus. With evil on the rise, Neo finds a new crew who helps him fight a new enemy. At the heart of the story is the relationship between Neo and Trinity, and the second half delves deep into that.

The best part about the film is the first act. This is where it feels the most Matrix-like. It has this great blend of meta humour to it that left me cackling many times in my seat. Just sitting there and seeing characters reference things that exist in the real world just made me go like, oh wow, this actually is an interesting direction. It also provides a sense of mystery that leads to a more interesting film that I wanted to see where I had to figure everything out piece by piece.

Keanu Reeves returns as Neo and has that constant confused look on his face and I dig it. He just stands there looking all befuddled and I was enjoying this immensely. But there are a lot of problems with the characterisation of him that I will get back to. Another thing that I loved was Jessica Henwick's Bugs. Surprisingly a great addition and one of the best parts about the film. I loved all the scenes that were there with her and she felt like the real heart of the film. Overall I think all the actors did a great job of bringing their characters to life, it’s only in their characterisation where the problem lies.

What’s some of the things that come to your mind when you think of The Matrix? Keanu Reeves as Neo, the cast, great action, breathtaking visuals and bullet time. The original Matrix film did wonders for the sci-fi genre as it not only advanced but also revolutionised it. While The Matrix itself was quite the amazing experience, its two sequels... not so much. The main problem being that the story had just gotten way too convoluted at this point. Sadly, The Matrix Resurrections features a lot of the same issues as it just feels like a 148 minutes of exposition dump trying to justify previous films.

After a great first act, The Matrix Resurrections takes a head dive into mediocrity. Characters come and go as exposition is dropped left, right and centre. The two hours left after the first act felt like I was watching plants grow. The heavy exposition definitely is a huge issue of this film and I think the way it is handled is probably what ticked me off the most.

Coming to characterisation, Neo feels like an extension of the audience. He isn’t as fun to follow in the second half of the film. Whenever he meets a new character, they just go into a five minute long monologue of exposition. For example, Priyanka Chopra in the film is for maybe 10 minutes, for those who don’t know the identity of her character, I am not going to spoil it. She shows up, drops info, and leaves. That’s all there is to her. Also legacy characters like Morpheus, they hardly feel useful in the plot after their turn of exposition is done. It just doesn’t feel natural. Spider-Man No Way Home Movie Review: Tom Holland’s Marvel Film Is a Multiversal Celebration of the Iconic Avenger! (LatestLY Exclusive).

Also for a Matrix film, The Matrix Resurrections has some of the weakest action of the franchise. There never was a scene that gave me that awe-inspiring feeling that I got from the previous movies. Over here it just felt uninspired and like a bad parody of The Matrix. Fights looked stiff, gunfights were weak, you just have to wonder where the budget went. The original Matrix movies at least had that green tint to it which gave them their own personality, over here it just feels like every other film ever. In the context of the movie, yeah the visual choice makes sense, but I was still looking for a more distinct choice.

The movie also heavily relies on nostalgia, and doesn’t execute it in a good way. If you have watched the second trailer, then there are a few scenes directly referencing previous films and they have those same clips from the older movies playing side by side. At first I loved seeing that happen, but as the movie progressed, they had used it so many times where it became tiresome to see.

Bad Characterisation of some characters

(The above story first appeared on LatestLY on Dec 22, 2021 09:55 AM IST. For more news and updates on politics, world, sports, entertainment and lifestyle, log on to our website latestly.com).