The Report Trailer: Adam Driver Will Get You Hooked as He Investigates the CIA in This Gripping True-Story Drama (Watch Video)

Check out the new trailer of Adam Driver's upcoming film with Amazon Studios, The Report. Starring him the role of an investigator, the film is based on a true story and leaves you intrigued with its amazing trailer. The dramatic thriller based on real events also stars Annette Bening, Jon Hamm, Jennifer Morrison, and Tim Blake Nelson in key roles. 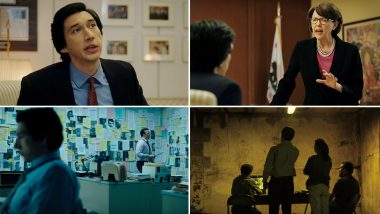 After an impressive trailer of his upcoming film, Marriage Story, here's another amazing piece of work that proves what a talent Adam Driver is. In The Report, we see Driver investigate the CIA’s Detention and Interrogation Program, which was created in the aftermath of 9/11. The dramatic thriller based on real events also stars Annette Bening, Jon Hamm, Jennifer Morrison, and Tim Blake Nelson in key roles. The Report is in the same space as the Academy Award-Winning film Spotlight which dealt was an investigation drama based on a true story. Marriage Story Teaser: Scarlett Johansson and Adam Driver Navigate Romance in Two Heartbreaking Trailers (Watch Video).

Driver stars a U.S. Senate staffer Daniel Jones, who's assigned to investigate accusations of torture against the CIA by California senator Dianne Feinstein (Bening) in the film. The trailer shows Driver's Jones being determined to unearth the truth behind CIA's actions of subverting the law and tampering with evidence. The trailer is full of tense moments that hook you in and promise that the film will be a taut thriller.

The Report earned rave reviews at this Sundance Film Festival 2019, and Amazon's decision to release it both in theatres and on streaming is in the hope that the film is going to be in the running for Oscar nominations this year. After receiving his first acting Oscar nomination for Spike Lee's BlacKkKlansman, it looks like Driver is looking for his second consecutive nomination at the 2020 Oscars. The Dead Don’t Die Trailer: Bill Murray, Adam Driver, Tilda Swinton and Selena Gomez Take On the Undead in This Zombie Comedy – Watch Video.

Director Scott Z. Burns on the other hand who is known for his works such as The Informant! and Contagion is yet to get his Academy nomination which many believe will change with this film. The Report is written and directed by Scott Z. Burns, the film is all set to release theatres on November 15th, followed by its streaming release on Prime Video on November 29th.

(The above story first appeared on LatestLY on Aug 23, 2019 12:14 AM IST. For more news and updates on politics, world, sports, entertainment and lifestyle, log on to our website latestly.com).