Hollywood star Tom Cruise recently took The Late Late Show host James Corden aboard a plane in a special video, four years after he asked the latter to jump out 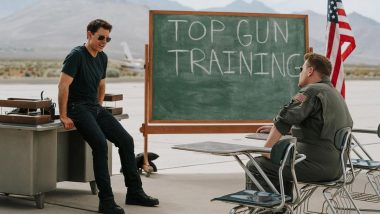 Hollywood star Tom Cruise recently took The Late Late Show host James Corden aboard a plane in a special video, four years after he asked the latter to jump out of one, reports 'Deadline'. The actor picked up Corden, who revealed he was leaving the late-night world in April, for a once-in-a-lifetime trip to the desert, piloting him in a vintage fighter plane for the afternoon. Mission Impossible – Dead Reckoning Part One Teaser: Tom Cruise’s Ethan Hunt Returns With a Stunning Globe-Trotting Action Extravaganza (Watch Video).

In the video, Tom can be heard saying, "I'm very excited that James is doing this. Was he the first late-night show I asked? Hell, no. He was just the first one the only one who said yes." As per 'Deadline', Cruise and Corden then ended up in a dogfight in the classic plane. Just when Corden thinks he's survived, Cruise informs him the two will be going up again - this time in a jet fit for modern aerial warfare. First, however, is the Top Gun training. Tom Cruise Sees Every Movie That Releases in Theaters and Wears a Disguise to Them. (via – Latest Tweet by One Take News.

"You are my goose," says Cruise. "When you say I am your Goose, it makes me feel excited and then I realize that Goose dies at the end of the film," replies Corden. Corden, who is better known for driving with celebrities in cars around LA rather than planes in the desert, and Cruise do get to bust out a few bars of Kenny Loggins' classic Top Gun tune Danger Zone during their overnight campfire stay.

"This is crazy," says Corden, not underplaying the situation, which makes for a perfect Late Late Show viral segment. "You can be my wingman, anytime," concludes Cruise as they disembark. "You know what? I think I'm good," laughs Corden.

(The above story first appeared on LatestLY on May 24, 2022 07:57 PM IST. For more news and updates on politics, world, sports, entertainment and lifestyle, log on to our website latestly.com).