A trailer of the film has now been dropped by the makers and the film stars Crowe along with Caren Pistorius, Gabriel Bateman, Jimmi Simpson, and Austin P. McKenzie in supporting roles in what seems to be a psychological thriller. 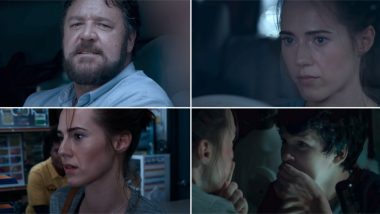 Coronavirus pandemic has brought everything to a standstill and it seems and it seems if all goes well and if theatres open by July in US, the first release will be Russell Crowe starrer Unhinged. Presented by Solstice Studios, the film as of now has been scheduled for a July 1 release and only time will tell if it will arrive in theatres then or get delayed. A trailer of the film has now been dropped by the makers and the film stars Crowe along with Caren Pistorius, Gabriel Bateman, Jimmi Simpson, and Austin P. McKenzie in supporting roles in what seems to be a psychological thriller. Crowe's character looks like he's on a wicket rampage and it seems it's because of his 'unhinged' personality. 'Gladiator' Almost Didn't Kill off Maximus, Says Russell Crowe.

The film's trailer starts with a woman named Rachel (Caren Pistorius) getting into a banter with Crowe's character after they exchange words during driving. Soon Crowe's character starts following her after she refuses to apologise to him and then we see his murderous side. At one point in the trailer, Crowe delivers a chilling line, "You don't even know what a bad day is. But you'll find out." We see him knocking someone off with his car, hammering down a door, thus promising that things are about to get intense. The trailer is gritty and suggests that the film may turn out to be an edge-of-the-seat-thriller. Russel Crowe's 'The Art of Divorce' Auction: Here's What Items Sold at the Highest Price.

Looking at Russell Crowe's career, there's hardly a chance that the actor won't deliver and hence we can expect him to pack a great performance in this film. The deranged man, going on a rampage and probably killing all those in the way, seems like a cliched yet commercially entertaining plot. The film has been directed by Derrick Borte and is as of now slated to release on July 1, 2020.

(The above story first appeared on LatestLY on May 13, 2020 02:08 PM IST. For more news and updates on politics, world, sports, entertainment and lifestyle, log on to our website latestly.com).