West Side Story is a 2021 musical film based on the stage play of the same name. Directed by Steven Spielberg, the film stars Rachel Zegler, Ansel Elgort, Ariana DeBose, David Alvarez and Mike Faist and is scheduled to release on December 10, 2021. 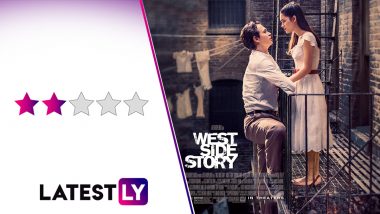 West Side Story Movie Review: It’s a well-known fact by now that West Side Story is basically Spielberg’s most passionate project yet. West Side Story is well known to be the one film that he has always wanted to make and that spoke to me a lot before release. Not knowing much about the original play or the previous movie adaptations, going in for this latest remake had me extremely excited, but leaving I felt disappointed. Steven Spielberg: I Had to Be Fearless to Make West Side Story.

West Side Story is a reimagining of Shakespeare’s classic, Romeo and Juliet. Featuring the rivalry between the American Jets and the Puerto Ricans in New York, the film focuses on a forbidden love between two people from the respective groups. Set in ‘50s New York, it’s a musical love story that starts off on quite a good footing but stumbles its way to the finish line.

Like the headline suggests, Rachel Zegler makes her feature film debut here and it’s the most impressive. Playing the role of Maria, who is the sister of Bernardo, head of the Puerto Rican gang, her performance is filled with passion, energy and innocence that makes the film enjoyable. Watching her was like watching a seasoned actor on screen and I can’t wait to see her in more projects. Talking about Bernardo as well portrayed by David Alvarez became one of my favourite characters. Honestly all the actors did a wonderful job and kept the movie interesting.

Songs also being a huge part of West Side Story, glad to report that they were extremely entertaining too. The production value in all was a huge highlight of the film. The streets looked like they were ripped out straight from the ‘50s and gave a great vintage look to the songs. They were wonderfully choreographed as well and complimented the sets amazingly. Whenever a song broke out, West Side Story was bustling with excitement and was when the film actually hit the heights of greatness. Unfortunately that’s the only time where I felt there was an ounce of that Spielberg magic to the film.

On the story side the film is a mess. There is a reason this story works so much better as a stage play rather than a feature film. Not to say the story doesn’t have any charm, it has plenty of it but the pacing of it just makes it so much difficult to like it. West Side Story feels like a fantasy film that’s set in a realistic world, and I think that’s what didn’t work for me. Maybe it’s my picky taste in musicals, but there wasn’t much this film could do for me.

For example, the romance of the central characters just feels devoid of any depth. They meet once, and want to spend the rest of their lives together. I could see this aspect work amazingly in a play, but for a film it just doesn’t do much for me. We hardly see much of the relationship of Tony and Maria and the film expected me to take their relationship seriously when I myself wasn’t connected to them.

The film clocks in at 158 mins, and it doesn’t feel like that at all. There is never a dull moment in West Side Story, and I don’t mean in a good way. There is always something happening on screen, the film keeps on moving at a breakneck speed. This didn’t give me enough time to process what happened on screen. By the time I had processed a previous scene, the film had already broken into another dance number. They don’t feel spaced out well.

West Side Story does slow down in its third act, but then by that point I was so exhausted where I didn’t feel much. Everything felt like background noise. Even the emotional ending that the film was trying to show didn’t have much effect on me. The relationship of the main characters felt so rushed where I just didn’t feel anything for them by the end. Even it ended on the most abrupt note possible where it felt jarring. West Side Story: Steven Spielberg’s Musical Drama Gets Banned in Saudi Arabia, UAE and Other Gulf Countries.

Also I don’t know if it’s just me, but Ansel Elgort’s singing didn’t do much for me. It just felt like he was talking while trying to sing and I just sat there thinking if something was wrong with me. But no, having that thought marinate in my head for a bit, I just couldn’t take his singing seriously. Rachel Zegler or anyone else he shared scenes with, they just shadowed him constantly.

West Side Story is a weird watch. It has all the makings of an excellent film. The production value is top notch, the songs are great, Spielberg is at the helm, but everytime it tries to reach greatness it just gets pulled back down to being pretty pointless. West Side Story is a technical marvel filled with many structural story issues, it’s all show but no substance, and given this was Spielberg’s passion project, it just made me leave the theatre quite disappointed.

(The above story first appeared on LatestLY on Dec 08, 2021 12:11 PM IST. For more news and updates on politics, world, sports, entertainment and lifestyle, log on to our website latestly.com).