Willem Dafoe Birthday: The Lighthouse, At Eternity's Gate - 5 Films Of the American Actor That Are Must-Watch

The actor celebrates his birthday on July 22 and as he turns 65, we look at his best work. With illustrious work like his, the actor has won several accolades, including nominations for four Academy Awards and three Golden Globe Awards. 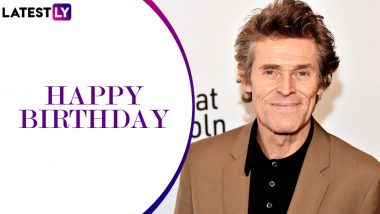 Willem Dafoe is one of the finest Hollywood actors who has shown his exceptional talents in films over the years. The actor has in his amazing career worked with some of the most accomplished directors including the likes of Paul Schrader, Abel Ferrara, Lars von Trier, and Wes Anderson among others. The actor made his screen debut as a lead with the film The Loveless in 1982. Later, he starred in some of the most acclaimed films including, Martin Scorsese's The Last Temptation of Christ, Light Sleeper, Spider-Man among others. Dafoe is known for his deep voice that distinctly stands out. Willem Dafoe Reveals How Difficult It Was Bonding With His The Lighthouse Co-Star Robert Pattinson.

The actor celebrates his birthday on July 22 and as he turns 65, we look at his best work. With illustrious work like his, the actor has won several accolades, including nominations for four Academy Awards and three Golden Globe Awards. Dafoe has also been awarded an Honorary Golden Bear of the 68th Berlin International Film Festival, recognizing his life's work. The actor also bagged the Stockholm Achievement Award in 2012. Here's looking at the actor's films.

One of his most recent films, The Lighthouse had one of the actor's finest performances. Dafoe and Robert Pattinson teamed up for a film that shed light on the horrors of extreme isolation. The psychological horror film starred the actors as two lighthouse keepers stranded for months at sea in a freak storm. If you haven't watched it yet, this should be on your list given that it was one of 2019's best films.

In Sean Baker's The Florida Project, Dafoe managed to give a restrained yet impactful performance. Dafoe played Bobby Hicks, a regular old-joe who manages a motel that is situated just in the shadow of Disney World. The film had received an Oscar nom and deservedly so, given its brilliant treatment and social commentary.

This film will always remain special for Willem's career given that he received his first Oscar nomination for this role in the Best Supporting Actor category. The film starred him in the role of Sergeant Elias, an idealistic officer in an Army unit in 1967 South Vietnam. This certainly is a notable role from Dafoe's career and also the one that made him stood out as someone who is exceptionally talented.

Dafoe managed to essay the role of famed artist Vincent Van Gogh effortlessly and truly mesmerised us on-screen. The Julian Schnabel film revolves around Vincent van Gogh's final years in the south of France leading up to his death. For every Dafoe fan, this film remains to be in his best works list.

In Wes Anderson's brilliant film, Dafoe plays a deadly assassin, J.G. Jopling, who isn't a regular villain. Dafoe played this role by adding a dash of comedy to it. The film received a lot of love from the audiences and is also considered to be one of Anderson's best films. Nightmare Alley: Willem Dafoe Joins Bradley Cooper for Guillermo del Toro Film.

Celebrating Willem Dafoe's work is certainly difficult given that you can't pick only a few films but these certainly remain our favourite.

(The above story first appeared on LatestLY on Jul 22, 2020 10:00 AM IST. For more news and updates on politics, world, sports, entertainment and lifestyle, log on to our website latestly.com).