Actors Willem Dafoe and Robert Pattinson were so intensely into their characters while filming "The Lighthouse", that they didn't "meet" each other properly until they started promoting the film. 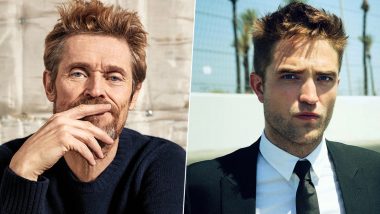 Actors Willem Dafoe and Robert Pattinson were so intensely into their characters while filming "The Lighthouse", that they didn't "meet" each other properly until they started promoting the film. Dafoe tells WENN he and his co-star didn't get to know each other during the shoot, because their characters disliked one another, reports aceshowbiz.com. He said: "We were shooting in a very difficult circumstances because a lot of it's outdoors and we're on this rocky peninsula, where we built this lighthouse. The weather was really extreme, really strong. So basically, I just knew him within the scenes and through the characters we were playing." Robert Pattinson Most Handsome Man Alive, Bella Hadid Most Beautiful Woman in the World As per Golden Ratio Equation Study.

Dafoe added: "We were working long hours and constantly changing to stay dry, just trying to survive the weather. Even when we're in the interiors, it's really cold and wet with flooding, so whenever you get a moment when you're not working, you retreat to change clothes and prepare for the next scene. Robert Pattinson Beats Henry Cavill, Bradley Cooper and Brad Pitt to Become World’s Most Handsome Man.

"I lived in a little fisherman's cottage, while Robert lived in town, so we never saw each other outside of the movie. It was only afterwards, when we started doing press, that we hung out a little bit and I got to know him." In the black and white movie, Dafoe plays an eccentric lighthouse keeper and "Twilight" star Pattinson his troubled assistant.

(The above story first appeared on LatestLY on Feb 10, 2020 01:52 PM IST. For more news and updates on politics, world, sports, entertainment and lifestyle, log on to our website latestly.com).