Zack Snyder’s Justice League: A Menacing Steppenwolf Smashing Amazonians in This Viral Video Clip Has Just Amped Up Our Excitement for Snyder Cut!

Zack Snyder's Justice League would be an HBO Max Exclusive, releasing on the OTT platform on March 18, 2021. It would be about four hours long, and Snyder confirmed that it would be released as a movie and not split into episodes. 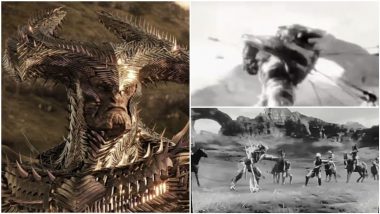 We all can agree that the alien conqueror Steppenwolf who we saw in the 2017 film Justice League, was one of the weakest movie villains in superhero movies. Voiced by Ciarán Hinds, Steppenwolf  was a complete CGI creation and looks less formidable than intended, and was easily dispatched when Justice League got together. However, OG director Zack Snyder promises to show his fans the real iteration of Steppenwolf that he had planned for his original vision, which he would showcase in his Snyder Cut. The trailer gave us a glimpse of that, but it is the new viral clip that is now making us more excited to see this baddie on screen. Justice League Fans Call For Warner Bros To Restore The Snyder Verse By Trending It On Twitter.

Now despite its flaws, one of the best scenes in the 2017 film Justice League was Steppenwolf taking on the Amazonians in a nice-choreographed action scene. Zack Snyder looks to have a different take on the scene, more brutal in fact. Since his cut is R-Rated, it allows Zack Snyder to go more violent in the action scenes and the glimpse of that result looks promising.

Snyder had shared the preview of the above scene in his Reels timeline from his post-production work area, and it went viral within seconds. The scene has Steppenwolf taking on the horse-riding Amazonians and brutally battering, with even the arrows sticking in his back not dampening his ferocity!

Zack Snyder previews new clip of Steppenwolf vs. the Amazons for ‘Justice is gray edition’ #ZackSnydersJusticeLeaguepic.twitter.com/bPYKK9OIiI

Shazam director David F Sandberg had a funny shade to throw on this scene.

I was already going to see it but now there's Steppenwolf smashing ponies?! https://t.co/AjgQ5LptY8

Looking at this menacing Steppenwolf, we wonder if the acolyte is so dangerous, how even more threatening his boss, Darkseid (all set to make his debut in DCEU with Zack Snyder's Justice League), would be. Forget Justice League Snyder Cut! 11 Bollywood Movies Whose Director’s Cut Fans Should Start Campaigning for Right Now!

Zack Snyder's Justice League would be an HBO Max Exclusive, releasing on the OTT platform on March 18, 2021. It would be about four hours long, and Snyder confirmed that it would be released as a movie and not split into episodes. Ben Affleck as Batman, Gal Gadot as Wonder Woman, Henry Cavill as Superman, Ezra Miller as The Flash Ray Fisher as Cyborg, Jason Momoa as Aquaman, Amy Adams as Lois Lane, Diane Lane as Martha Kent, Jeremy Irons as Alfred Pennyworth, JK Simmons as James Gordon, Connie Nielsen as Hippolyta would all be reprising their roles in the film.

Apart from these characters, we would also be seeing Ray Porter as Darkseid, Willem Dafoe as Nuidis Vulko, Zheng Kai as Ryan Choi, Peter Guinness as DeSaad, Kiersey Clemons as Iris West, and Jared Leto as the Joker, who were not present in the 2017 Justice League. The trailer of Zack Snyder's Justice League would be released on February 14.

(The above story first appeared on LatestLY on Feb 09, 2021 12:01 PM IST. For more news and updates on politics, world, sports, entertainment and lifestyle, log on to our website latestly.com).