Of course, the track looks beautiful and all three have again managed to steal the hearts, but Kevin’s individual fans are not much happy with it! 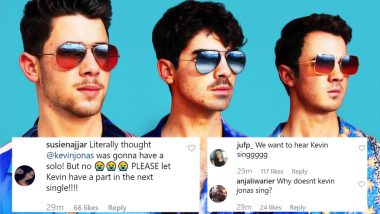 Jonas Brothers are back and how! Despite taking a long gap with their ‘Jonas brothers’ collab, they have returned only to make the fans fall in love them all over again. All these three handsome hunks have their separate fan-bases. Their previous song, “Sucker” gained enormous response and also clinched the top spot on Billboard Hot 100 list! They now released another new song called “Cool” which is indeed like a breath of fresh air. However, the only aspect that fans found uncool about this song was less presence of Kevin Jonas! Jonas Brothers' 'Cool' Song: High on Elvis Presly Vibes, the Trio in Coloured Suits Will Make You Groove to Their Beats.

“Sucker” too had very less of Kevin Jonas and now the history repeats with this song as well. Of course, the track looks beautiful and all three have again managed to steal the hearts, but Kevin’s individual fans are not much happy with it! They appreciated the video song but demanded more of Kevin. They flooded the social media with the question like “Where is Kevin” and “Why is Kevin not singing?”

However, the fans might not feel disappointed yet as there are many more songs lined up by the Jonas Brothers. There might be an entire piece specially curated for Kevin, you never know! Meanwhile, check out the song below.

Joe was quoted revealing their future plan as, “We’ve got a lot of songs that are recorded. When we figured out what the sound was going to be like — balancing Nick’s sound, DNCE’s sound, and Kevin bringing so much heart into it — has been really incredible. It was just really important to blend the three. We have 30-40 songs that we are excited to release, so I think in the next few months you’re going to hear more.” Keep your fingers crossed while the Jonas Bros keep surprising us with more and peppier tracks.

(The above story first appeared on LatestLY on Apr 05, 2019 10:20 AM IST. For more news and updates on politics, world, sports, entertainment and lifestyle, log on to our website latestly.com).