Jonas Brothers' 'Cool' Song: High on Elvis Presley Vibes, the Trio in Coloured Suits Will Make You Groove to Their Beats

A new song by Jonas Brother titled 'Cool' is here. How 'Cool' do you think it is? 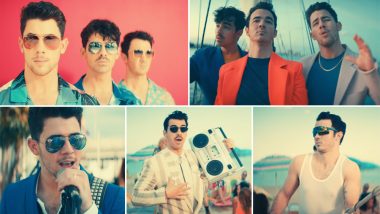 After hitting the No 1 spot for Billboard Hot 100 for the first time in their careers, Jonas Brothers - Nick Jonas, Joe Jonas and Kevin Jonas are back with their second song, 'Cool'. The song has a fun, lazy vibe to it and we love how the Jonas bros go for fun colourful suits for the video. While the 'Sucker' video made waves thanks to the brothers getting their lady loves in the song, this time they stick to a regular video.

'Cool' is an easy-breezy track that one can probably listen to when they are travelling. In terms of bringing back the classic pop vibe, we think Jonas Brothers are doing t a good job given that 'Boy Bands' haven't really been doing well. Shot on the beachside, probably in Miami, the new song may not turn out to become as a big sensation as their comeback song 'Sucker' but it sure doesn't disappoint as well. Jonas Brothers Set the Internet on Fire With Their New Single Sucker as if We Weren't Obsessed with Nick Jonas and Priyanka Chopra Already.

Nick Jonas and his brothers had shared a teaser of the song earlier and we knew it was going to be 'cool' ever since we saw them.

Take a look at the new song here:

The lyrics of the song range from James Dean to Game of Thrones references and we are all for the fun vibe they create. Just like Sucker, Nick Jonas gets to the front and while Joe takes the vocals only for a selected portion. We sure expected Joe to get more in the second song but well, let's wait for more songs should we?  Jonas Brothers Reunite: Comeback Song ‘Sucker’ Featuring Priyanka Chopra and Sophie Turner Is a Total Banger – Watch Music Video.

The three-minute video is all sorts of fun and we are sure we are going to warm up to this song but it may not enjoy as much popularity as 'Sucker' may be. For all those people who have missed Jonas Brothers, the Boys are back and they are here to stay.

(The above story first appeared on LatestLY on Apr 05, 2019 10:09 AM IST. For more news and updates on politics, world, sports, entertainment and lifestyle, log on to our website latestly.com).