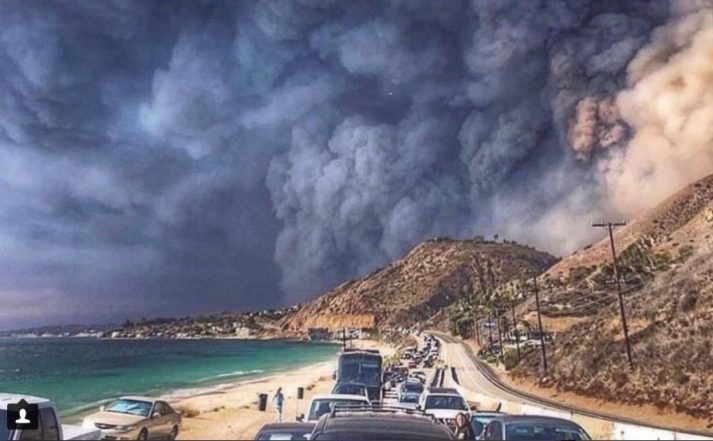 The U.S. state of California is being ravaged by three wildfires (Photo: Instagram)

The fires ravaging the California landscape have spared neither the rich nor the poor. More than 2,50,000 people have been forced to evacuate their homes to avoid three major blazes across the sunshine state.

The fast moving ‘Woolsey fire’ in Southern California has torched homes of celebrities and even film sets. As of Sunday night, the fire had spread to 85,500 acres and was just 15% contained. The wildfire has forced thousands of people to evacuate their homes and top Hollywood names are amongst those affected. Singer Miley Cyrus, songwriter Neil Young have lost their Malibu homes and reality TV stars – members of the Kardashian clan, including Caitlyn Jenner and Kendall Jenner did not know the fate of theirs.

Miley Cyrus posted on Twitter that she was "completely devastated" by the fires that affected her and her community. "I am one of the lucky ones. My animals and LOVE OF MY LIFE made it out safely & that's all that matters right now. My house no longer stands but the memories shared with family & friends stand strong. I am grateful for all I have left. Sending so much love and gratitude to the firefighters and LA county Sheriff's department! "

Completely devestated by the fires affecting my community. I am one of the lucky ones. My animals and LOVE OF MY LIFE made it out safely & that’s all that matters right now. My house no longer stands but the memories shared with family & friends stand strong. I am grateful for

Song writer Neil Young wrote in a post on his official website  that he is personally seeing and feeling the impact of climate change which is a cause of the wild fires. Neil Young said "I have lost my home before to a California wildfire, now another."

Robin Thicke and girlfriend April Love Geary's Malibu home partially burnt down, and April shared a photo of the home's remains on Saturday:

Our home is just to the left! Praying

The Woolsey Fire burnt down parts of the ‘Westworld’ a Paramount Western Town Ranch studio that has been used for film shooting since the 1950s. HBO expressed concern for "all those affected by these horrible fires."

Sad for fans of @WestworldHBO and shows like Dr Quinn Medicine Woman, the Paramount Ranch western town movie set has burned to the ground in the Woolsey Fire @CBSLA #westworld #Woolseyfire pic.twitter.com/DhZWaGbr6g

The Woolsey Fire reached the Bachelor mansion, where parts of the reality show are filmed. The latest season was being partly filmed at the mansion since September, but has been moved to other locations. The lower house was destroyed, according to The Hollywood Reporter.

The Woolsey Fire also forced Lady Gaga and her family to evacuate. The singer and "A Star is Born" actress posted pictures and video of her family packing and leaving to her Instagram story.

I am thinking so deeply for everyone who is suffering today from these abominable fires & grieving the loss of their homes or loved ones. I’m sitting here with many of you wondering if my home will burst into flames. All we can do is pray together & for each other. God Bless You.

Earlier in the week, actor Gerard Butler had sent out a message saying he had lost part of his home to the fire. Butler shared an image of himself standing outside a burned-out section of the house.

Returned to my house in Malibu after evacuating. Heartbreaking time across California. Inspired as ever by the courage, spirit and sacrifice of firefighters. Thank you @LosAngelesFireDepartment. If you can, support these brave men and women at SupportLAFD.org. Link in bio.

Unfavorable conditions for firefighting are expected to persist into Monday, threatening new flare-ups that could impact other vulnerable areas across California state.