Moshé was an executive producer in a documentary called American Badass: A Michael Madsen Retrospective. This documentary highlights the life of famous actor Michael Madsen, showcasing his trials and tribulations in the film industry, as well as some of his most notable and interesting stories over his career. 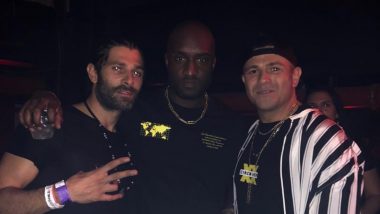 The entertainment industry can be very difficult to breakthrough in, however, once an individual has left their footprint on the industry, their name becomes widely recognized, opening the door for more opportunities that may not have presented themselves if the individual did not attain previous success in the industry. Moshé Partouche has prospered in a variety of entertainment sectors, from organizing exquisite and popular parties in his home country of Israel, to producing Hollywood documentaries about noteworthy names, like iconic designer Christian Audigier, as well as A-list actor, Michael Madsen.

Moshé first burst onto the scene when he brought the famous Circoloco music festival to Israel. Circoloco began as an underground festival for dance music enthusiasts in Ibiza, quickly evolving to become a pillar of the party life and dance music that permeates the island, a transcendent event that fuses music, culture, as well as having some of the most world-famous DJ’s from around the world. Moshé knew that this would be a big hit in Israel, as the country is famous for its elaborate parties at exotic scenes, featuring some of the most popular DJ’s in the electric dance music scene. Moshé not only graced Israel with the gift of this extravagant event, but also organizes other events in the booming nightlife scene of Tel Aviv, as well as numerous other cities throughout Israel. Such creativity has made Moshé a staple in the nightlife industry, as he continues to throw elaborate and exclusive parties for his home country to enjoy.

Being a serial entrepreneur, Moshé does not limit himself to nightlife, but is also the creator of the rising Moyo Brothers label. Moyo Brothers produces great music that has become so popular, it can be found on a number of streaming services like iTunes, SoundCloud, Ibiza Global Radio, and many more. He is now looking to take his thriving empire outside music and nightlife, as he has won numerous awards for several documentaries that feature prominent Hollywood names like John Travolta, Ron Perlman, Quentin Tarantino, Charlie Sheen, among others.

Moshé was an executive producer in a documentary called American Badass: A Michael Madsen Retrospective. This documentary highlights the life of famous actor Michael Madsen, showcasing his trials and tribulations in the film industry, as well as some of his most notable and interesting stories over his career. It was featured in the Sundance Film Festival, the documentary is a great watch for any film buff or Michael Madsen fan.

Armed with such a plethora of success, Moshé is looking to continue to extend his reach in the film industry to produce more movies and documentaries, and hopes to someday become a director. In the meantime, this nightlife savant plans to grow his impressive name in the Israeli club scene, as well as make more music for his Moyo Brothers label. Moshé Partouche is a serial entrepreneur that is sure to further his name and brand into mainstream society for years to come.