As #MeToo movement in India picks steam, here's a look back at the 1960s when Rekha was violated by her director Raja Nawathe and co-star Biswajit Chatterjee, while the male dominant crew cheered... 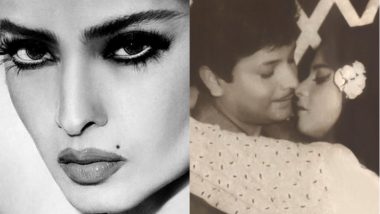 Tanushree Dutta spoke about being harassed by Nana Patekar on sets of Horn Ok Please ten years back, today when the actress revisits her horror story she's being labelled as a attention seeker. Thanks to Tanushree, the #MeToo movement in India has kick-started. Women from different walks of life apart from the entertainment business are not just speaking up against their wrongdoers we also are witnessing a change. Thanks to social media, we have a revolution where more and more assault victims are finding courage to tell their horror stories. Actors, singers, filmmakers, journalists and other professionals are being called out and justice for these crimes has become the demand of the hour. But did you know almost five decades ago Rekha was forcibly kissed by her Anjana Safar co-star Biswajit Chatterjee on the film's director Raja Nawathe's insistence.

In Yasser Usman's biography, Rekha: The Untold Story narrates an incident on the sets of Anjana Safar, which was later rechristened as Do Shikari. Rekha was barely 15 and her director Raja Nawathe plotted an unexpected kissing scene with the film's lead Biswajit. The actress was never informed about this intimate scene, in fact,  the director asked Biswajit to catch hold of an unaware Rekha and kiss her forcefully for full five minutes. Neither the actor nor the filmmaker felt the need to take the minor's consent before filming this shot. Yasser writes in his book, "For all of five minutes, Biswajit kept kissing Rekha. Unit members were whistling and cheering. Her eyes were tightly shut but they were full of tears." Also watch: Rekha Admits Being 'Hopelessly in Love' With Amitabh Bachchan

Biswajit too admitted that Rekha was miffed and in his defense said, "It was not for my enjoyment, but important for the film. Rekha felt betrayed and was furious." While the elaborate kissing scene was snipped short in the movie, it earned the young newbie the title of a "bold" Bollywood actress very early on in her career.

(The above story first appeared on LatestLY on Oct 10, 2018 07:20 PM IST. For more news and updates on politics, world, sports, entertainment and lifestyle, log on to our website latestly.com).