After Keerthy Suresh, Rakul Preet Singh Decides to Slash Her Fees by 50 Percent? 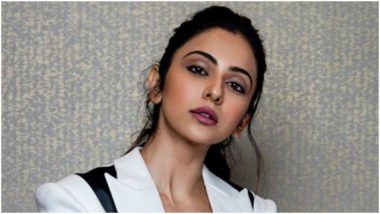 While film producers are looking forward to resuming their productions while simultaneously thinking about the losses they have incurred in recent months, actors are thinking of taking pay cuts to help ease their burden. Mahanati actress Keerthy Suresh was among the first names who voluntarily decided to slash her fees, De De Pyaar De actress, Rakul Preet Singh has now willingly joined her in the league. As per new reports, the actress has decided to take a 50 per cent pay cut in her remuneration and her decision will help the producers in the longer run. Rakul Preet Singh Flies to Delhi in Mask, PPE Kit and Face Shield; Perfect Airport Look in Times of COVID-19.

A report in Times of India suggests that Rakul's decision to cut her fees by half will make for an estimated amount of Rs 75 lakh per project. While there's no official confirmation from the actress' side, sources close to her insist that she has already taken her decision and started implementing on the same. Rakul's a popular name in regional as well as Bollywood film industry. She has a good number of projects lined up and it includes Indian 2 with Kamal Haasan and a cross border love story with Arjun Kapoor.

Coming to Keerthy Suresh, the Penguin actress had earlier decided to slash her fees by 20-30% but Rakul went a step further by increasing her percentage. As things are returning to normalcy and movie shootings are on the verge of getting back on track, here's hoping that films are able to wrap on time and theatres get a chance to start functioning.

(The above story first appeared on LatestLY on Jul 07, 2020 05:53 PM IST. For more news and updates on politics, world, sports, entertainment and lifestyle, log on to our website latestly.com).