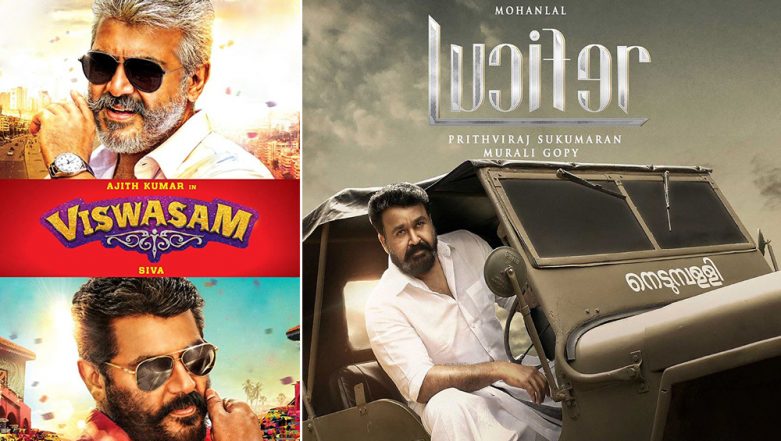 The first quarter of 2019 has definitely been a great one for the South Indian movie lovers. The filmmakers have given some incredible films. Be it Tollywood, Kollywood, Mollywood or Sandalwood, every industry has had great hits at the box office in the first quarter of this year. These films were one of the most-anticipated films of the year and it turned out to be worth the wait. Some of them are even been remade in other languages. After all it is not just about the die-hard fans, but the intriguing plot which grabbed everyone’s attention. Viswasam, Lucifer, Yajamana and F2 – Fun and Frustration are the four films from the south side that ruled the box office in the first quarter of 2019. Majili Full Movie Leaked Online by TamilRockers, Samantha Akkineni and Naga Chaitanya’s Romantic Drama Available for Free Download.

Ajith Kumar and Nayanthara are the leading and the most-sought after actors of Tamil film industry. These two were the lead stars of Viswasam, directed by Siva. January 2019 was ruled by Viswasam. It was also dubbed and released in Telugu as well as Viswasam and in Kannada it was released as Jagamalla. The action-drama managed to mint more than Rs. 208 crore. Superstar Ajith Wraps Up Shoot of Pink Remake Nerkonda Paarvai.

The movie was special to Prithviraj Sukumaran as it was his directorial debut and this film had the leading stars of Mollywood. Mohanlal played the lead role and fans could not stop praising about his performance and the intriguing plot. It has been just nine days since the film has been released and it has already become a huge hit amongst the movie buffs and also at the box office. Lucifer has earned more than Rs. 40 crore just in Kerala. Mohanlal's Lucifer Becomes a Top Trend of the Week, Here's Google India's Celebratory Tweet With the Actor's Doodle.

Harikrishna’s film Yajamana has emerged as the superhit film in the first quarter of 2019. Starring Darshan, Rashmika Mandanna and Tanya Hope as the lead cast, the action drama opened to positive responses, making it a blockbuster instantly. It was a comeback film for Darshan after a long gap.

Anil Ravipudi is known to be the ace filmmaker of Telugu cinema and actors/actresses look forward to work with the director. He directed F2 – Fun and Frustration and the viewers were enthralled. The movie which minted above Rs. 120 crore starred Venkatesh, Varun Tej, Tamannaah Bhatia and Mehreen Pirzada in the lead. For those who don’t know, Boney Kapoor and Dil Raju would be remaking this film in Hindi and it would be directed by Anees Bazmee.

So these are the four films from different industries of the south that ruled the first quarter of 2019. They were not just commercially successful but the plot and performances of the star casts were also mind-blowing. Let’s wait and watch what the second quarter of the year has to offer. Stay tuned for all the updates from the showbiz industry.