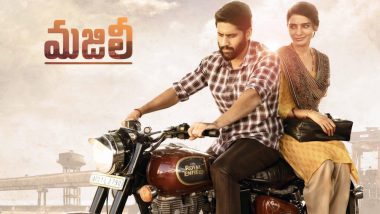 Majili isn’t the first South Indian film to be leaked online. There are many other films and web series that have faced the wrath of online piracy. It would hardly be 24 hours that a film must have released in theatres, and in no time TamilRockers makes it available on its portal. Samantha Akkineni and Naga Chaitanya’s romantic drama Majili has reportedly been made available online for free download by TamilRockers. Majili Movie Review: Twitterati Go Gaga Over Samantha Akkineni-Naga Chaitanya’s Performance – Read Tweets.

Before Majili hit the screens, the other films which were leaked online by TamilRockers were Mohanlal’s Lucifer and Nayanthara’s Airaa. It is indeed disheartening to see the films going for a toss at the box office due to such cyber-crimes. According to a report in the Filmi Beat, Samantha Akkineni and Naga Chaitanya’s fans are highly upset after the full movie was leaked online. ChaySam fans have requested the movie buffs to make it to the theatres and watch the film instead of watching it online and supporting TamilRockers’ acts. Naga Chaitnaya and Samantha Akkineni aka ChaySam Visit Tirupati Ahead the Release of Majili – See Pics.

Will all of them be able to say no to online piracy? Even today there are people who watch films that are leaked online and due to it, sites like TamilRockers keeping on doing such acts. The Shiva Nirvana film had opened to positive responses. The lead actors’ performances were also praised by the audiences and critics. But after the movie been leaked online, one can’t predict how the figures will turn out at the box office.

(The above story first appeared on LatestLY on Apr 06, 2019 04:01 PM IST. For more news and updates on politics, world, sports, entertainment and lifestyle, log on to our website latestly.com).