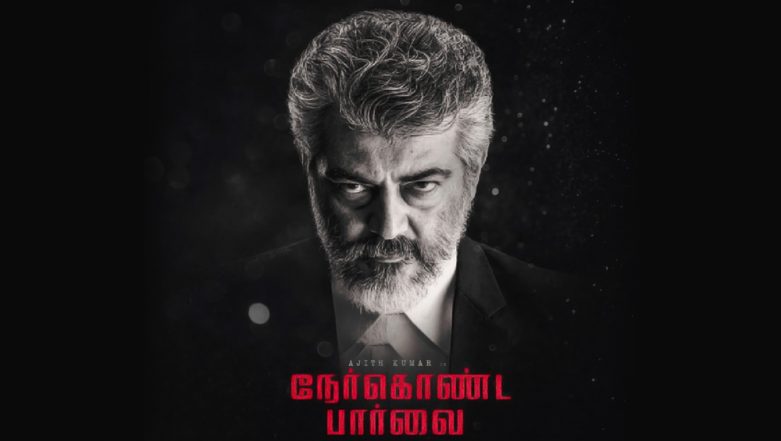 The Hindi film Pink starring Amitabh Bachchan in the lead, is now been remade in Tamil titled Nerkonda Paarvai starring superstar Ajith in the lead. The film will also see Bollywood actress Vidya Balan portraying as Ajith’s wife in the film. Directed by H Vinoth, this also marks the actress’ debut in the Tamil film industry. As per reports, Thala Ajith has wrapped up the shoot of Nerkonda Paarvai. Did Ajith Kumar Get Rid of His Beard for Nerkonda Paarvai? Actor’s New Look LEAKED Online – See Pic Inside.

If you remember, recently there were pictures of Ajith been surfaced on the internet in which he was seen without beard. The pictures which hit the internet was apparently from the sets of  Nerkonda Paarvai. Talking about the film’s shoot been wrapped up, a source from Hyderabad revealed to TOI, “The entire shooting process of the film was completed the day before, with Ajith canning his last scene. The film went on floors in Chennai in December, and portions that didn’t require him to be part of it were shot there. The actor joined the team in Hyderabad, and was shooting there for almost two months.” Nerkonda Paarvai: Ajith Kumar's Tamil Remake of PINK Confirmed to Release on August 10.

Take a look at the tweet shared by Ramesh Bala:

The original film Pink was a huge hit the box office. The Tamil version would also be starring Shraddha Srinath, Abhirami Venkatachalam and Andrea Tariang in key roles. Nerkonda Paarvai is produced by Boney Kapoor and this also marks his debut as a producer in the Tamil film industry. The script of this social thriller is also penned down by H Vinoth. Let’s wait and watch how Nerkonda Paarvai turns out to be on the big screens.