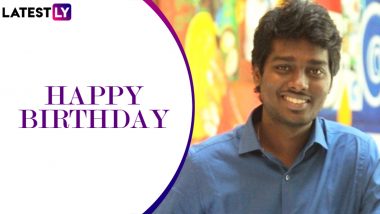 Atlee Kumar, fondly known as Atlee, is one of the popular and one of the most loved filmmakers of Tamil Cinema. He has helmed few films in his directorial career, but all of them have not only opened to positive reviews, but they have also been a huge hit at the box office. Atlee, who celebrates his 34th birthday on September 21, is indeed one of the finest directors of Kollywood. Atlee had started his directorial career as an assistant director under S Shankar and he had worked him on the project Enthiran. He also worked with the ace filmmaker in another project, Nanban. Varun Dhawan to Star in the Remake of This Thalapathy Vijay-Atlee Blockbuster?

Actors and actresses look forward to collaborate with him and one of the actors who have been extremely lucky to team up with Atlee is Thalapathy Vijay. It was in 2012 when Atlee had made his directorial debut. On the occasion of Atlee’s birthday, let’s take a look at those four films helmed by him and where one can watch it online. Andhaghaaram, Produced By Atlee, To Release Directly On Netflix?

In 2013, Atlee had made his directorial debut with the rom-com Raja Rani that starred Arya, Jai, Nayanthara, Nazriya Nazim and Sathyaraj in the lead. It not only received thumbs up from critics and fans, but it even grossed more than Rs 500 million from the South Indian box office within four weeks. This blockbuster movie is currently available on the OTT platform Amazon Prime Video.

This was the first time that Atlee had joined hands with Thalapathy Vijay. The action thriller that also featured Samantha Akkineni and Amy Jackson as the leading ladies was a blockbuster and is currently available to watch online on Amazon Prime Video.

Atlee and Thalapathy Vijay got to be known as the hit director and actor duo. Mersal, which is directed and co-written by Atlee, also featured SJ Surya, Kajal Aggarwal, Samantha Akkineni and Nithya Menen. This movie was so much in demand that it was screened at the largest cinema theatre in Europe Grand Rex, France. Mersal is available on the streaming giant Netflix and also on ZEE5.

Atlee’s last directorial project was in 2019, titled Bigil. For the third time he teamed up with Thalapathy Vijay and second time with Nayanthara. Vijay’s dual role in this flick garnered immense praises and if you haven’t watched this mass entertainer, you’ll get to watch it on Amazon Prime Video.

These are the four and the blockbuster films directed by Atlee. We just cannot wait to hear about his future projects and the actors with whom he plans to collaborate. Here’s wishing the ace filmmaker of Kollywood, Atlee, a very happy birthday!

(The above story first appeared on LatestLY on Sep 21, 2020 10:07 AM IST. For more news and updates on politics, world, sports, entertainment and lifestyle, log on to our website latestly.com).