Andhaghaaram, Produced By Atlee, To Release Directly On Netflix? 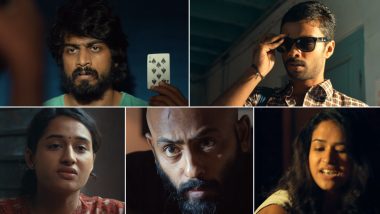 It was in last month when Atlee had released the trailer of the film Andhaghaaram that is produced by him. This suspense thriller features Arjun Das and Vinoth Kishan in the lead roles. Produced under Atlee’s home banner A for Apple, it is now heard that this long-delayed project will get a web release. As per a report in Sify.com, Andhaghaaram will release directly on Netflix. Andhaghaaram Trailer: Arjun Das' Psychological Thriller Produced by Atlee Promises to Be An Edge-Of-The-Seat Ride (Watch Video).

There has been no official announcement made about the release of Andhaghaaram on digital platform. Although, there are many south films that would be releasing directly on OTT platform. This decision was taken by the makers due to the lockdown and having no clarity by when the cinema halls will be reopened. The makers did not want to incur any further losses on their projects. Regarding Andhaghaaram, the report further states that Netflix has bagged the rights of the film and it will premiere in June on the streaming giant. But we’ll have to wait for the official word. 5 South Movies Confirmed to Premiere on Amazon Prime Video.

The film that was recently released on OTT platform was Jyotika’s courtroom drama Ponmagal Vandhal. There are four more south films that are confirmed to have a direct web release. Andhaghaaram is directed by V Vignarajan, marking his directorial debut. Pooja Ramachandran and Misha Ghoshal will also be seen in key roles in this supernatural suspense thriller.

(The above story first appeared on LatestLY on Jun 01, 2020 02:45 PM IST. For more news and updates on politics, world, sports, entertainment and lifestyle, log on to our website latestly.com).