Dhruv has his work set with his debut film Adithya Varma ready to take on Baahubali The Beginning on November 22. Should he be worried? We don't think so! 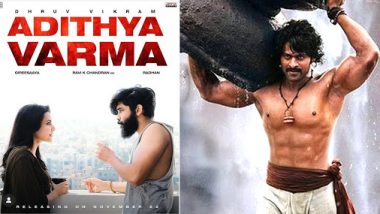 Clashes are always unwelcome. They cut into each other's screen space and monies. But what do you say when you are placed against the high and mighty of cinema world in India? Dhruv, Vikram's son, who is gearing up for the release of his debut film Adithya Varma, will have to take on none other than Baahubali The Beginning. Yes, S S Rajamouli's first in the series is getting a re-release in Tamil on November 22 as well. Adithya Varma Song Yaen Ennai Pirindhaai Starring Dhruv Vikram Hits 4 Million Views On YouTube!

Adithya Verma is the third rerun of Arjun Reddy with another lead hero and set in a different industry. It began with the Telugu film starring Vijay Deverakonda, Shahid Kapoor made a killing with Kabir Singh and now Adithya is set to enter Indian cinema with its Tamil version. Should he be worried? Well, not really! There is hardly anyone who hasn't watched Baahubali The Beginning, so there may not be a huge threat.

Dhruv does have the advantage that he is Vikram's son and people would love to know how the offspring grew up under the shadow of one of the brilliant actors of Indian cinema. Baahubali isn't the only film which will contesting with Adithya Varma. Here're the rest...

But if the film or Dhruv for that matter, fails to make it count at the theatres, people might opt for Rajamouli's magnum opus for nostalgia sake. That's because the story of Adithya Varma has been told in many languages already and our guess is there won't be much changes to the plot.

(The above story first appeared on LatestLY on Nov 20, 2019 10:18 AM IST. For more news and updates on politics, world, sports, entertainment and lifestyle, log on to our website latestly.com).