Is Shruti Haasan Being Paired Opposite Pawan Kalyan in Vakeel Saab?

The upcoming Telugu film, Vakeel Saab, is the remake of Amitabh Bachchan’s hit film, Pink. This film is directed by Sriram Venu of and is produced by Boney Kapoor and Dil Raju. 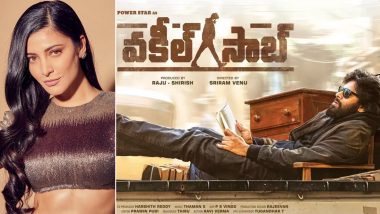 The upcoming Telugu film, Vakeel Saab, is the remake of Amitabh Bachchan’s hit film, Pink. This Hindi film was also remade in Tamil as Nerkonda Paarvai and it received thumbs up from critics and fans. Well, it is all set to be released in Tollywood as Vakeel Saab with Power Star Pawan Kalyan in the lead. When the makers had released the film’s first look, it featured no heroines. But numerous names have been rounds on the internet regarding Vakeel Saab heroine, and one among them is Shruti Haasan. Vakeel Saab: Is Ileana D’Cruz the Lead Heroine in Pawan Kalyan Starrer?

There were reports citing that south beauty Shruti Haasan will be playing the role of Pawan Kalyan’s wife in Vakeel Saab. Although there has been no official announcement made yet about the lead heroine in Vakeel Saab, Shruti has cleared the air. During an Instagram Live with Pinkvilla, the actress opened up about her being a part or not of Vakeel Saab. She was quoted as saying, “It was something that just passed by. It wasn’t concrete. It’s really an elaboration of a rumour. So, I wouldn’t like to talk about it.” Pawan Kalyan’s ‘Pink’ Remake ‘Vakeel Saab’ Has No Women on First-Look Poster.

Fans are eagerly waiting to know who would be playing the lead actress in Vakeel Saab, directed by Venu Sriram. Hope the makers of this project will make an announcement on it soon and put an end to all the speculations doing rounds. Stay tuned for more updates from the world of entertainment.

(The above story first appeared on LatestLY on Apr 09, 2020 09:44 AM IST. For more news and updates on politics, world, sports, entertainment and lifestyle, log on to our website latestly.com).