The Tamil film Jail that released in theatres today (December 9) is directed by Vasanthabalan. The film starring GV Prakash Kumar in the lead has also been released in Hindi and Telugu dubbed versions. 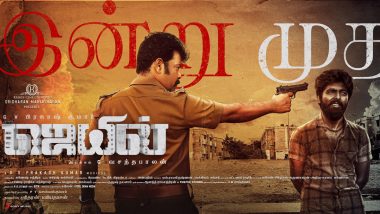 The Tamil film Jail that released in theatres today (December 9) is directed by Vasanthabalan. The film has also been released in Hindi and Telugu dubbed versions. The crime drama stars GV Prakash Kumar in the lead. It also features Abarnathi, Radhika Sarathkumar, Yogi Babu and Robo Shankar. The story is narrated through youngsters Karuna (GV Prakash), Rocky (Nandhan) and Kalai (Pasanga Pandi). It highlights about the illegal and corrupt activities that’s happening in a resettlement colony. Selfie Trailer: GV Prakash Kumar Lock Horns With Gautham Vasudev Menon in This Action-Thriller (Watch Video).

Although the performances of the film’s lead actors have been praised, the narrative has turned out to be rather weak for the critics.  Let’s take a look at what critics have to say about Jail.

TOI – Despite its admirable intentions, Jail is let down by crude writing that deals only in cliches and doesn't offer anything more to add on to what we hear in the opening voice-over.

Firstpost – Jail is a well-intentioned film but the treatment feels extremely dated. Jail heavily underestimates its viewer. The smallest bit of information is explicitly explained -- there’s a lot of ‘saying’ and not much ‘showing’. The film is said to be set in 2015, but you wonder if it was actually made in 2015.

StudioFlicks – Over the years, we have seen many movies depicting the deplorable lives of slum dwellers. Henceforth, this movie fails to enliven our movie-watching experience.

The expectations from Vasanthabalan was high who has helmed critically acclaimed films such as Veyil, Angadi Theru and Kaaviya Thalaivan. However, critics are disappointed with Jail.

(The above story first appeared on LatestLY on Dec 09, 2021 01:21 PM IST. For more news and updates on politics, world, sports, entertainment and lifestyle, log on to our website latestly.com).