Kamal Haasan Birthday: Did You Know 7 Films of Ulaganayagan Represented India At The Oscars, Highest By Any Actor?

Kamal Haasan celebrates his birthday today. Fans have been in a frenzy to do the same since yesterday. We decided to list out the seven movies of the actor that were India's entry at the Oscars, which is the highest for an actor in India. 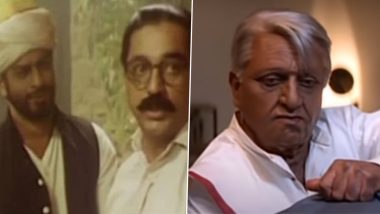 Kamal Haasan is an institution in himself. He is a fantastic actor and filmmaker. The best part about this man is he makes movies he truly believes in. Be it having multiple avatars in a single film or playing a dwarf at the peak of his career. Nobody does experimentation better than him. His style, mannerisms and love for cinema makes him a class apart. But what stands out as the most unique and rare quality is his knowledge of cinema. Making movies and understanding them are two different things. Cinema isn't just a visual medium that tells a story and makes a star out of everyone for him. Hence, it shouldn't surprise you to know that seven of Haasan's movies were selected as India's entry at the Oscars. That's a record that hasn't been broken by any actor, male or female! Vikram: Kamal Haasan’s First Glance From Lokesh Kanagaraj's Directorial Is Thrilling (Watch Video)

A few of these movies have been dubbed in Hindi and have entertained the North Indians as well. The movies are Saagar - a love triangle, Swami Mutayam which sees Haasan as an autistic man who marries a widow, Nayakan portrays a man's rise as a ganster after witnessing his father's murder, Thevar Magan depicts a young man's struggle to live his dream or fulfill his father's wishes, Kuruthipunal is fight of an honest official to decide who is more important to him between his family and country, Indian is about a freedom fighter who decides to end corruption by using his special martial arts skills and Hey Ram sees him as an extremist who tries to assasinate Mahatma Gandhi.

Artists like Kamal Haasan sees cinema as a medium to put their thoughts across. That's why Indian works and that's also why we just can't get his face in the climax of Sadma out of our head. Nobody and we repeat nobody, will ever match that, we dare them to remake it.

(The above story first appeared on LatestLY on Nov 07, 2021 12:00 AM IST. For more news and updates on politics, world, sports, entertainment and lifestyle, log on to our website latestly.com).