Kamal Haasan's Indian 2 is finally back on track and things are working out in Shankar's favour. After releasing the film's two earlier posters, the makers have released a new one that sees Senapathy standing tall with his chest filled with pride. This sequel also stars Rakul Preet Singh, Kajal Aggarwal, Siddharth, Bhavani Shankar and Aishwarya Rajesh in key roles. 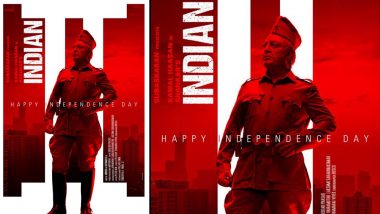 Independence Day 2019 is just getting started and Kamal Haasan already has a right patriotic treat for his fans. After reports of his Indian 2 getting shelved, things are finally working in its favour and shooting of which has already commenced. After releasing the film's first poster that highlighted Senapathy's two-finger paralysing trick, they later gave us a proper look of his older, wiser and deadlier version. And to honour India's 73rd Independence Day, makers have released its new poster that sees Senapathy standing tall, with his chest filled with immense pride.

Indian 2 had its own set of troubles starting with the film's budget issues. There were reports of how Lyca Productions doesn't want to invest so much in Shankar's directorial, especially after the failure of 2.0 at the box office. They wanted him to cut down on his project and the director wasn't willing to. While reports suggested if Lyca has backed out as the producer of this sequel, their name on the poster in the upper left corner proves that their issues have been sorted and things are fine between them.

The industry is also buzzing with the news of Indian 2 being Kamal Haasan's last movie before he joins politics as a full-time career. The actor wants to focus all his attention into political work and his party and he's even willing to bid his filmy career a goodbye. Indian 2 also stars Siddharth, Rakul Preet Singh, Kajal Aggarwal, Priya Bhavani Shankar and Aishwarya Rajesh in key roles. Recently we read stories of Bollywood actor, Vidyut Jammwal playing the main antagonist in this sequel. We'll wait for an official announcement to confirm that.

(The above story first appeared on LatestLY on Aug 15, 2019 08:34 AM IST. For more news and updates on politics, world, sports, entertainment and lifestyle, log on to our website latestly.com).