If you love those dubbed South movies on television, then KGF Chapter I has enough action scenes mounted on a big scale to keep you invested. 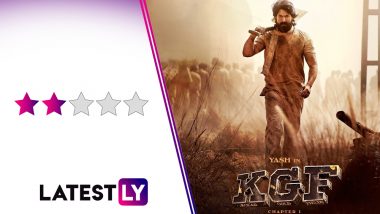 There was a time when it was unimaginable to think a South dubbed movie would rule over the box office all over India. Then SS Rajamouli came with Baahubali series, and the entire country was left stunned with the kind of business the movie did, both in India and overseas. Recently, 2.0 also did some amazing business in North of India, and many South films have been doing better business than Bollywood films in the past couple of years. While Tamil and Telugu films had a chance to impress the Hindi belt, now is the time for a Kannada film to do the honour with KGF Chapter I - a film that had the guts to face a Shah Rukh Khan movie at the box office. KGF Song Gali Gali: Mouni Roy Oozes Oomph With Her Sexy Dance Moves in Yash Starrer – Watch Video

The movie begins with an author (Anant Nag) telling a journalist about his book that talks about the gangs of India's El Dorado, Kolar Gold Fields, and the one man who would rise up to be their king. A baby was born to a miner's wife on the same day when the first gold brick was discovered in the mines in 1951 and the first massacre happened over it. After losing both his parents at an early age, the boy runs to Bombay where his courage gets him the notice of the ruling don. As he grows up, he is anointed as Rocky Bhai (Yash), and is feared by the opposing gangs for being a mean killing machine and and respected among his peers for his ambitions.

When the '70s Bombay begins to feel too small to hold his brawn-power, he is sent for an assignment to kill a big fish in Bangalore. There he meets the love of his life Rina (Srinidhi Shetty), a haughty daughter of a kingpin. It's also here that Fate points towards the direction of his future kingdon, KGF.

KGF Chapter I had caught our attention with the trailers that showcased stunning visuals with glorious violence. If violent films are your taste, then KGF has plenty such scenes that satiate the gore-hound in you. There are so much killings in the film that I am actually surprised that KGF didn't end up getting an A rating.

Though, if you are expecting a realistic kind of violent saga a la Gangs of Wasseypur, then you are bound to be disappointed. For even in that extensively mounted scale of things, lies a typical South action film that is all about glorifying the unbeatable hero who walks with a swagger. Rocky Bhai is immune to bullets and his persona is such that even if villains come in hordes to kill him, they will only attack him one by one. At times, KGF feels like Baahubali set in contemporary setting. But then Baahubali was fun, right?

Here's where KGF Chapter I falters. The first half that shows Rocky's childhood and his rise among the gangs feels very perfunctory to the proceedings. The romantic subplot is the basic 'taming of shrew' kind of idea we have seen in countless such movies. KGF Trailer 2: Yash is a Monster on Rampage In This Spectacular Display of Violence and Machismo - Watch Video.

It is only towards the second half that 'KGF' actually comes into play. Our hero disguises himself as one of the prisoners-slash-workers in the mine to take down an opponent. Though these scene did remind me of Thalapathy Vijay's Kuruvi, the portions involving the conditions of the mines do manage to hold your attention. However, there are repetitive scenes of prisoners getting tortured and the director Prashanth Neel, drags them so much that I was praying for Rocky to just wake out of his stupor and kick the ass of those stereotypically bad, woefully made up villains. There are so many interchangeable antagonists with no distinct personality. We also have a main baddie who wants to offer human sacrifice to appease Goddess Kali. And none of them are can hold a candle against the hero's might!

By the time Rocky brings our interest back in the movie, we find out it has ended and all that we have been seeing till now is a three-hour long trailer of far more interesting sequel. With the lack of strong material in the first instalment, there was really no need to split this in two!

I have to add here that there were some fun moments in KGF, both intentional and unintentional. Having grown up watching a lot of South movies, there were some mass moments involving Rocky that made me chuckle. Another scene that I found hilarious was when the narrator skips many years ahead to reveal a different story of Rocky only to be later reminded by his listeners of his gaffe. And when he does so, his narration also has a narrator!

From what I read in various reports, this is the most extensively mounted Kannada film, and that is evident in many of the actions scenes and the ones involving the mines. The production values are top-notch for a movie made on this scale. However, the shaky cam and the jump-cut editing makes it difficult at times to follow what exactly is happening on screen. The background score is terrific, especially the score used in the climax.

Watch the Trailer of KGF Chapter I here -

It is completely a Yash show, as the young man owns the screen completely from his entry scene. Be it in delivering one-liners or in the action scenes, the actor is a charm in everything he does. The rest of the characters, including Srinidhi Shetty, don't get enough scope. Mouni Roy (in Hindi version) sizzles in an item song.

- An unnecessary first half

If you love those dubbed South movies on television, then KGF Chapter I has enough action scenes mounted on a big scale to keep you invested. If you expect KGF to be a gamechanger like Baahubali 2 and 2.0, then maybe wait for the second chapter!

(The above story first appeared on LatestLY on Dec 21, 2018 02:57 PM IST. For more news and updates on politics, world, sports, entertainment and lifestyle, log on to our website latestly.com).